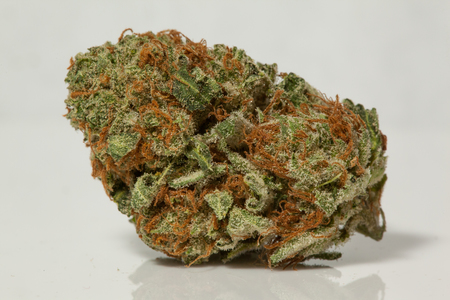 Banana Kush combines the best qualities of its name. Banana Kush offers an earthy, yet, sweet flavor and indica high. A delightful and dank package, indeed. The indica-leaning hybrid has become increasingly popular in cannabis circles across the nation. Banana Kush is known for being a potent and heavy hitting indica that is excellent for the end of the day. Consumers love the earthy, skunky, and still sweet flavors from Banana Kush.

This award-winning strain is a consumer favorite in many legal cannabis markets. High profile accolades include the best indica trophy and third place in the best hybrid category in the 2011 Cannabis Cup. Banana Kush often also has impressive THC percentages within the 20th percentile. Its high THC content can even be as high as 27% THC.

Banana Kush is a hybrid that is slightly more indica-dominant and revered for its relaxing and sedative properties. However, this strain is still known for a mild sativa effect at the beginning of the high. Banana Kush is commonly said to inspire creativity and intensify feelings of happiness.

Banana Kush embraces the idle indica properties of its parents and is for evening or nighttime use. The strain's buzzing mental stone also hints at its slight sativa lineage. Generally, Banana Kush leans 60% to the indica side. Commonly, the strain can make a user feel relaxed, euphoric, fatigued, and uplifted.

Banana Kush is also an incredible strain for easing your stomach after a big meal, recovering from a workout, getting some shut-eye, or even gaming out!

Negative symptoms are few but can encompass dry eyes, dry mouth, extreme fatigue, and dizziness. If you over-consume Banana Kush during the day, you might end up binge watching some Netflix!

Cali Kush also stakes its claim on the strain. Banana Kush is either a cross between OG Kush and Banana or Ghost OG and Skunk Haze. OG Kush fosters the strain's sedative high with more massive side effects.

Banana Kush is considered a moderately challenging strain to grow. Banana Kush plants don't often exceed 2 meters in height or yields more than 99 grams per square meter. Amnesia Seed's version claims to have much higher yields between 450 and 700 grams. Banana Kush plants can be relatively high maintenance and require extra attention during the growing process. It takes the strain between nine and ten weeks to flower.

Where to Find Banana Kush

During the recent green rush, Banana Kush has expanded from its West Coast roots and gained fans throughout the country. The strain is favored in Oregon, Washington, Colorado, and different Canadian provinces.

Find out what shops carry Banana Kush near you, here!