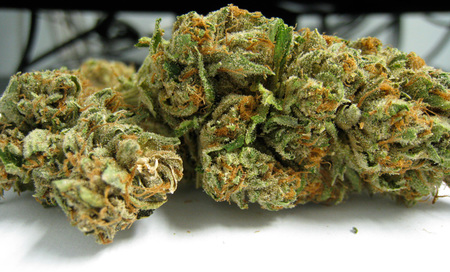 Ghost OG is a hybrid strain only available to growers as a clone. Ghost OG is rumored to have one of the most elite cuts in the world. A direct descendant of OG Kush, the THC potency averages 21 percent, providing a full experience with a near-instant high. The experience is a balance of head and body effects. Like many desired strains, Ghost OG grows best indoors, and can be found all over North America.

Ghost OG is a hybrid, 70/30 indica-dominant strain. There is a lot of mystery with this one, hence the term "ghost." This award-winning cannabis strain is one of the most sought-after strains in the United States.Thought to be the mother of all OG strains, Ghost has an average THC level of 21 percent and produces a lighter smoke than other OG strains.

Ghost OG is easy to recognize thanks to its frosty, trichome crystal-covered buds. The medium-dense flowers are also covered in light orange hairs, woven between pointed, light green calyxes. The appeal of Ghost OG doesn't stop there - when you give it a sniff, consumers are shrouded with a sweet, dank aroma.

Upon consumption, the aroma of citrus and pine will dance with a complementing fruity and Skunky smell.

You might experience dry eyes or cotton mouth, and some have reported feelings of paranoia and dizziness. Ghost OG may lead to sedation in higher doses and may not be suitable for those with an abundance to do.

A direct descendant of OG Kush, Ghost OG was crossed with an Afghani landrace strain to develop a balanced strain profile full of desired consumer effects. OG Kush is one of the great parent strains, having dozens of strains developed from its genetics. Similarly, Afghani is among the world's most renowned indica strains. Afghani is thought to have originated in the Afghanistan-Pakistan mountains, but there's no way to be completely sure.

If you're hoping to grow Ghost OG, you'll need to start from a clone as this strain is not sold in seed form. During your grow, it's important to prune lower branches so the top can fully develop. Expect a nine-week flowering time, and a moderate-to-heavy yield.

Ghost OG is an easy-to-moderately difficult strain to grow, and it can be produced both indoors and out. If grown indoors, Ghost OG takes an average of eight (8) to nine (9) weeds before harvest, supplying roughly 11 ounces per plant.

Where To Find Ghost OG

This strain is found all over North America, but is most prevalent towards the west coast. Look for it at dispensaries in California, Washington, Colorado, Arizona,Michigan, and Illinois.