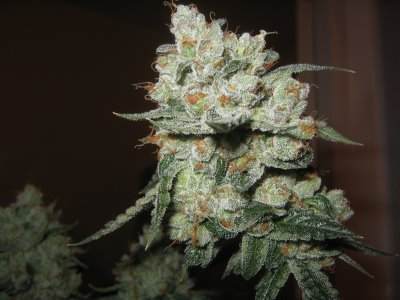 OG Kush makes up the genetic backbone of West Coast cannabis varieties. Popular myth maintains that Chemdawg and an indica, Hindu Kush, parented OG Kush, passing on the distinct "kush" bud structure we see in many strains today. Whatever its true genetics may be, OG Kush is commonly described as sativa-like in its euphoric and happy effects that combat stress and anxiety.

It has an earthy, pine scent with woody undertones, an aroma that has become the signature of OG Kush varieties and descendants.

OG Kush: the famed strain equivalent to cannabis caviar in the stoner world. Favored by smokers and growers alike, OG Kush is included in most West Coast genetic varieties. If you've dabbled in hybrids like Girl Scout Cookies or Bruce Banner, you've tasted some of OG Kush's potency. OG Kush is hailed by marijuana industry experts and rappers alike.

The strain is notably ranked as the best strain of all time by High Times Magazine.

OG Kush can demonstrate a variety of phenotypes and can be manipulated by its environment. The strain's high THC potency and pungent yet fresh flavor explain why OG Kush is one of the priciest cannabis strains. Different growers have won numerous awards for their takes on the OG Kush strain.

Despite the strain's noteworthy presence in modern California cannabis genetics, the origins of OG Kush itself are less clear. Most contend that OG Kush is a cross between Chemdawg and Hindu Kush parents. Believers note the strain's Kush-like bud structure. Some theorists add Lemon Thai into the genetic mix.

OG Kush's high is famously happy and uplifting. A sativa-like sense of euphoria sweeps over the smoker, crushing stress and inducing body relaxation. Those that indulge with OG Kush can also experience sleepiness. Due to its ultimately calming effects, regular users recommend smoking OG Kush in the evening. Taking before bed can be a helpful aid to a full night of rest.

With a murky origin story, Sour Diesel and Chemdawg are often considered the parent strains of OG Kush. Other theories throw Lemon Thai genetics into the genetic mix. There are many different phenotypes of OG Kush, some of which include Tahoe OG, SFV OG, and Alpha OG.

What we know for sure: OG Kush officially enteredthe cannabis trade in the 1990s and has since been perfected in Southern California. The strain is sometimes known as "original gangster" or "ocean grown," referencing its California heritage. No matter where the 'OG' in OG Kush came from, it's clear that this kind of weed is here to stay.

Experienced growers suggest to top the plants, cutting the fan leaves that grow towards the plant's top, to help OG Kush breathe better. Flowering times vary depending on the variety but are generally reported around 9 weeks. Indoor plants can yield up to 1.6 ounces per square foot.

Where to Find OG Kush

While OG Kush has a rich history of origin in California, the strain is so popular that it can be found in any legalized state. It's commonly found in cities such as Los Angeles, Denver, and San Francisco.