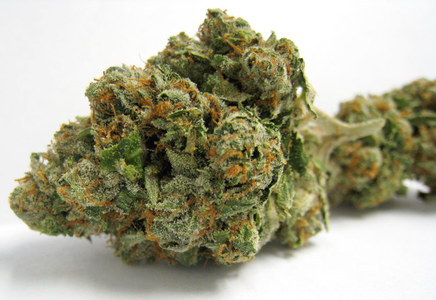 Tahoe OG Kush is a strong indica-dominant hybrid strain that was originally created as a phenotype of OG Kush and  San Fernando Valley OG Kush. This hybrid delivers fast-acting effects including feelings of relaxation, euphoria, upliftment, and sleepiness.

Tahoe OG Kush helps relax the body and mind. The effects are felt immediately and can be hard-hitting but effective, making this an ideal night-time strain. Tahoe OG Kush's effects last up to three hours, and after the high decreases, users feel significant relaxation.

The average THC content is between 20-25 percent, so the high isn't too overpowering, but it still contains a strong punch of euphoria.

The spicy, lemony, and earthy aroma of this hybrid makes it stand out as one of the most widely desired and widely used strains in the medical cannabis world.

A nug of Tahoe OG Kush is a thing of beauty. The plant contains small musty green-looking nugs alongside dark-colored orange/red amber hairs covered by a thick layer of frosty amber-colored trichomes accompanied by sticky and sweet resin. Some growers describe Tahoe OG Kush as having large neon green calyxes, but each phenotype is consistently layered with a thick coat of crystal trichomes.

Depending on how much of this strain is consumed, users could also feel negative side effects like dry mouth, dry eyes, dizziness, paranoia, and/or a headache, but the last three effects are rare.

Although Tahoe OG Kush is indica-dominant, it has strong euphoric cerebral effects from its sativa parent. Tahoe OG Kush's parents are OG Kush and San Fernando Valley OG Kush, and each of these strains were originally crossed with Afghani. Generally, Tahoe OG Kush has an average THC content of 20-25 percent, which varies based on the grower.

Growing Tahoe OG Kush is moderately difficult, and it grows between 30-78 inches in height with an average yield of 3-6 ounces per square foot. This hybrid flowers between 7-9 weeks on average, and it can be grown indoors or outdoors; however, the best climate is warm and sunny.

Where to Find Tahoe OG Kush

Tahoe OG Kush is found commonly in California, where it was initially bred near Lake Tahoe by a ganja guru who lived near the lake in the 1980s. You can additionally find this hybrid in Colorado and Michigan, though it's hard to come by.