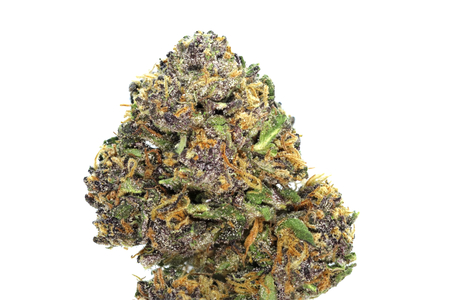 Hindu Kush is an original landrace indica strain that hasn't changed much since it was discovered. Forming the basis of many notable strains such as OG Kush, Hindu Kush is a heavy-hitting indica that creates a relaxing, full-body high that lasts longer than average. It is characterized by a musty, earthy scent, and punctuated with hints of spice and pine. The true Hindu Kush is very difficult to find, but it's an instant hit for those who manage to get their hands on it.

As one of the original indicas, Hindu Kush has a beautiful dense structure. This strain produces picture perfect, large buds of a medium green muted by silvery trichomes. Look for an abundance of bright orange pistils, and occasionally highlights of purple. This purple phenotype is the result of the compound anthocyanin producing pigment due to cold exposure, and it's something special to witness. Although the buds of Hindu Kush are sticky and silvered, this strain does not produce much THC. Most tests register in the realm of 15-20% THC content.

Hindu Kush is high in the terpene humulene, which is also found in certain hops, and sage. Caryophyllene gives this strain its complex spicy aroma, which includes notes of pine and sandalwood atop an earthy base. The most striking part of Hindu Kush's smell and appearance is the amount of resin it produces. As a result, the smoke from this strain is harsher than most, and can elicit a hearty cough from even experienced smokers.

Hindu Kush hits quickly, and can start out subtly. You'll first notice a marked relaxation of the entire body, often starting with the extremities. This quickly transitions into a body stoned that's extremely comfortable. Your thoughts may lose their clarity, and you'll find your mind wandering.

Many users report a mental fogginess which, while desirable to some, may be unpleasant for others who prefer a high marked by the mental clarity of a sativa. Some users experience paranoia is not a common side effect of this strain. Most users report a strong couchlock effect, which makes this strain one best suited for nighttime use.

The term "Kush" has been co-opted to refer to hundreds of strains and is often used to refer to marijuana in general. However, Hindu Kush is where it all started. This purely indica strain comes from the Hindu Kush mountainous region between India and Pakistan, where it has been growing naturally for thousands of years.

Hindu Kush came to the United States in the 1960's and 70's, by travelers following what was called "the hippie trail". Since then, the original Hindu Kush has been cross-bred with countless other cannabis strains in the hopes of distributing its remarkable properties to other varieties of marijuana.

Growers should know that Hindu Kush's pure indica heritage shows in its short but wide growing stature. These plants rarely grow over 5 feet tall, which makes them an ideal strain for people who are growing indoors and concerned about space. Yields are up to 1.5 ounces per square foot, and plants usually begin to flower at 7-10 weeks of age.

Where to Find Hindu Kush

Hindu Kush is notoriously difficult to find no matter where you are. Because it's traveled such a long journey and experienced so many deviations along the way, most Hindu Kush strains are crossed with other genetics.

You'll have the best luck finding real Hindu Kush along the West Coast, in California, Oregon, or Washington.