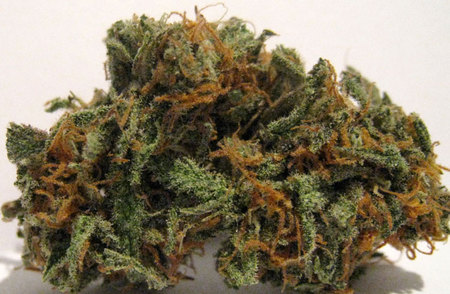 Goo is a premier indica-dominant hybrid with a taste and aroma, unlike other strains.  Its classic lineage is what makes this strain such a solid flower. It has a mild THC content but still packs a mighty high. Goo is an ideal strain for kicking back and watching some movies or chowing down on a large meal. It is a smooth smoking strain bound to please the consumer. However, it is often mistaken for the famous strain Afgoo. Its buds are dense and pungent with a phenomenal bud structure.

Goo is a unique indica-dominant hybrid with a somewhat classic heritage. Its berry, earthy and sweet flavor profile catches consumers by surprise. While Goo may not sound very appealing, it's a delicious smoke. Some consumers even say it tastes like blueberry dessert. It is not the highest testing strain but still ranges from 16 to 20 percent THC. Goo has a variety of therapeutic uses which makes it a useful strain for medical marijuana patients. The effects of Goo can be overpowering and commonly lead to a sedating high. It is a perfect strain for a late smoke session!

Consumers find the effects of Goo to be relatively potent and slow-acting. The high creeps up and becomes euphoric and relaxing. Be sure to expect the munchies and pick up some snacks before smoking down on some Goo. Quickly after the munchies, is a powerful sedating body high which often leads to couch lock or solid nap!

The adverse effects of Goo are mild. Its lower THC content keeps the strain from being too overpowering. Some consumers report feeling groggy, but the most common adverse effects are cottonmouth and red eyes.

The Lineage of Goo

Goo has a stellar set of parents. It is a cross between Blueberry and Hindu Kush. Both of these parents are famous strains in the world of cannabis. The flavor and bud structure of its parents shine out in Goo.

This strain is a good strain for beginning growers. It does well in both indoor and outdoor environments and has an average flowering time of around 45 to 55 days. Goo is known for producing a solid yield which often reaches as high as 4 ounces per square foot. Goo is a fun strain to have around for its pungent smell and trichome-rich buds. Even experienced growers enjoy having some Goo in their rotation.

Where to Find Goo

Goo is most popular in the Canadian cannabis market. From time to time, it will pop up in the state of California.

Check to see if a local dispensary near you has some Goo on their shelves, here!