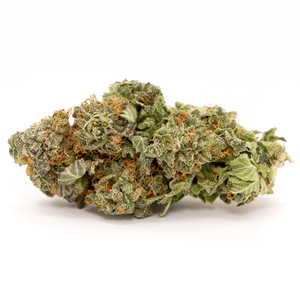 Bruce Banner is a potent strain that was bred by Delta 9 in Colorado. The strain is named after The Incredible Hulk's alter ego, as an homage to its high THC levels and heavily intoxicating effects. As a sativa-dominant hybrid of OG Kush and Strawberry Diesel, Bruce Banner delivers a racy, energetic high at its onset before transforming into a more mellow finish. It was first sold at the Delta 9 Caretakers dispensary in Denver in early 2010 and has since become one of the most popular strains to emerge out of Colorado. There were originally five phenotypes of Bruce Banner, though only three are still sold.

With THC levels of 20% to 28% (and even as high as 29% in some cases), Bruce Banner is one of the most potent strains available. Smokers experience a quick rush of energy within seconds of inhaling Bruce Banner, which gives way to euphoria and a burst of creativity. Many suggest that the strain is best as a daytime or afternoon pick-me-up, a cerebral high that elevates the mood and sparks motivation while also making the user more social and talkative.

After the first 30 minutes to one hour, tokers become mellower and feel a relaxing body high that lasts for about another hour (depending on dosage, etc.). This effect, which recalls its OG Kush parent, balances out the initial intense energetic feeling and can even induce sleepiness.

Bruce Banner is a strain that is highly sought after for its enjoyable high. Smokers feel a quick rush of euphoria that degrades into a mellow and pleasant high. The initial hit is typically more consistent with the effects of a sativa, packing an energetic punch. The second half of the high displays the flower's indica lineage with a more relaxing high.

While imbibing Bruce Banner is usually an enjoyable smoking experience, the strain is quite potent. This makes it a poor choice for beginners as the raw power of the bud can lead to more extreme versions of the standard marijuana cons. Dry mouth and eyes coupled with the possibility of anxiety or a headache are some of the symptoms associated with this strong strain.

Delta 9 created Bruce Banner in 2009, and the strain entered the marketplace at the same time as a surge in the acceptance of medical cannabis in the United States. The timing of its release helped solidify Bruce Banner's popularity, and the Delta 9 dispensary attracted large crowds when the strain was introduced to the medical cannabis community in 2010. Its legend grew even further through word of mouth and social media, making it one of the most well-known strains from the state of Colorado.

Buds tend to be notably dense and puffy, with a Juniper smell reminiscent of OG Kush combined with the fruity aroma that comes from the Strawberry Diesel element of the hybrid. Bruce Banner tastes earthy and sweet with a hint of citrus flavor, again showcasing characteristics that come from each of its parent flowers. The flowering stage usually occurs at about 8 to 10 weeks.

The plant's magenta colored leaves contrast nicely with its bright green buds and red pistils. The large trichomes that cover the surface of the buds give it a frosty look. Bruce Banner is about 60% sativa and 40% indica, and it contains no CBD.

Where to Find Bruce Banner

Bruce Banner is highly popular in its home state of Colorado, but it can also be regularly found in Arizona, Washington and Oregon. The Bruce Banner #3 phenotype won first place for potency in the 2013 Denver US Cannabis Cub and is still one of the most potent strains tested in the history of the High Times Cannabis Cup.