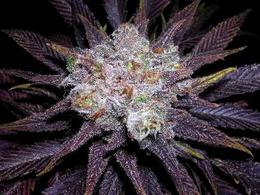 Blockhead is a unique indica-dominant hybrid with a rare set of effects. It is considered a 65 percent indica and 35 percent sativa. Its rounded high makes it an ideal strain for a variety of consumers. Blockhead produces dense dark-green buds covered in trichomes. Blockhead has a jar appeal perfect for recreational shops. Not only does its bud structure catch consumer's eyes, but its aroma really stands out. This strain has a reasonably high THC content and does pack a solid punch. Blockhead got its name after its spacey and mind-boggling high.

Blockhead is an ideal indica-dominant hybrid for both recreational and medical marijuana patients. It has a high THC content of around 18 percent to 22 percent THC. The fast-acting effects of Blockhead can be a bit overwhelming for beginning consumers; however, it is a premium strain for seasoned consumers. Blockhead's unique effects pair perfectly with its interesting flavor profile. Consumers describe its flavor as being woody and sweet with a lemony undertone. This strain exceeds nearly every quality standard and is a prime example of a top-shelf flower.

The effects of Blockhead are relatively balanced, but the sedating effects always overtake the body. The overall high is euphoric and happy which leads to relaxing body high with severe munchies. After maxing all the food in the house, Blockhead tends to put consumers to sleep.

The adverse effects of Blockhead are mild and mainly consist of red eyes and cottonmouth. Some consumers report feeling paranoid and groggy when consuming high doses.

The Lineage of Blockhead

Blockhead came from the popular Genehtik Seeds farm and was originally known as Buruandi. The exact lineage of Blockhead has been a mystery for some time now. To this day, the entire heritage of Blockhead is still unknown. The only known parent of Blockhead is the classic Sweet Tooth. Until the original breeders decide to end the secrecy, the true lineage will stay a mystery.

Blockhead is not an easy strain to grow. Cultivators find this strain to be particularly sensitive, and require a fair amount of attention. The yield is mediocre, but the quality of its buds makes up for weight. Blockhead does well in both indoor and outdoor environments but takes a decent amount of time to flower. This strain is a useful strain for beginning growers to test their skills.

Where to Find Blockhead

Blockhead is not widely available on the legal market. It is most likely to be in states like Washington and Colorado. Occasionally, Blockhead does make an appearance on the Californian cannabis market.

Check to see if your local dispensary has some Blockhead on their shelves, here!