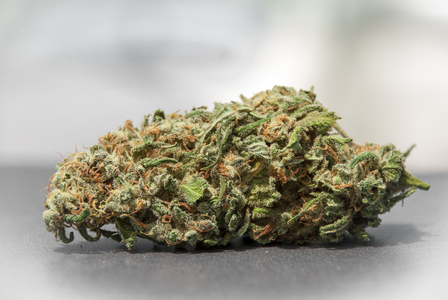 9 Pound Hammer is a potent indica dominant strain that is perfect for moments of deep relaxation and stress relief. This strain is known to induce sleepiness, making 9 Pound Hammer a dominant agent against insomnia. The 9 Pound Hammer strain is appealing with its large, colorful buds. Its primary aromas combine to form a bouquet of fruit steeped with incense.

9 Pound Hammer is a potent indica hybrid with only 20% sativa genes lending their influence. The strain name comes from its status as a heavy-hitter, thanks in part to a THC content between 18% and 23%. CBD content is quite low, at under 1% in most cases. 9 Pound Hammer terpene profiles are dominated by pinene, with humulene and myrcene following a close second and third.

The aroma is sweet and fruity. Users will taste sweet grape, lime and a trace of earthiness on the inhale, with more pungent sweetness on the exhale. Fans of "fruity" cannabis strains will most likely enjoy the flavor and smell of 9 Pound Hammer.

Buds of 9 Pound Hammer are neon green and dense, with undertones of darker greens and purple. Saturated with resin the buds are typically sticky to the touch thanks to the dense production of trichomes. Some crops will yield large nugs with a gorgeous purple hue. This is produced by a pigment called anthocyanin, which is activated by cold temperatures during the vegetative stage of growth.

The effects of 9 Pound Hammer are indicative of its 80/20 indica to sativa ratio. The buzz typically lasts longer than average and gives the smoker a rush of happiness before settling into a sedated and sleepy state. It is best consumed in the evening or as a nightcap; a large bowl of 9 Pound Hammer is not recommended as a wake-and-bake option unless the smoker plans to chill out and watch a few movies

Before enjoying a bowl or joint of 9 Pound Hammer, users may want to consider stocking their cupboard with snacks to satisfy the inevitable onset of the munchies shortly after consumption. Outside of couchlock, 9 Pound Hammer's only consistent adverse effect is dry mouth. It can occasionally also cause dizziness and dry eyes, and in rare cases, the user may experience mild paranoia.

The Lineage of 9 Pound Hammer

9 Pound Hammer is the offspring of a cross-breed between the Gooberry (indica), Hell's Angel OG (hybrid) and Jack the Ripper (sativa). Introduced by TGA Subcool Seeds, 9 Pound Hammer was brought into the world by the prolific breeder who brought us Space Queen and Jesus OG.

Commercial growers like 9 Pound Hammer because it produces high yields in a short time span of about 55 to 60 days. 9 Pound Hammer can easily be grown indoors, though outdoor growers have had plenty of success with the strain. Growers will love that this strain is a fast-growing crop that typically produces buds in 55 to 60 days and produces a stellar yield as a reward for your effort.

Where to Find 9 Pound Hammer

9 Pound Hammer can be found in California and Nevada, though the availability is not quite as ample as it is in the Pacific Northwestern states of Oregon and Washington. Still, due to its high potency and powerful indica effects, both recreational and medical users are attracted to 9 Pound Hammer all across the country.