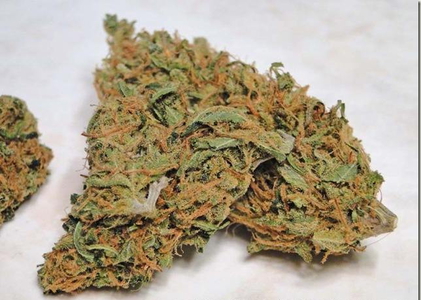 Jack the Ripper was one of the world's most infamous serial killers, terrorizing the people of London in the late 19th century. While the strain that bears his namesake is not quite as deadly, it certainly packs a hefty punch for smokers that need an uplifting sativa hybrid boost. It is the first hybrid from TGA Genetics, bred by Subcool to be sold in seed form. It has a ratio of 70% sativa, 30% indica. Buds of Jack the Ripper are triangle shaped and carry a sweet lemony aroma mixed with a pine scent.

Overview of Jack the Ripper

Jack the Ripper was named to the High Times Top Ten Strains List in 2006. It carries a potency typically ranging from high teens to mid-20s in THC percentage. The effects of Jack the Ripper tend to be slightly delayed, creeping into the mind and eventually reaching a crescendo of heady proportions. Smoker's looking for an uplifting cerebral experience that boosts creativity and sometimes offers a psychedelic tilt should give Jack the Ripper a try.

The taste is reminiscent of the smell, with many smokers reporting a tropical fruit vibe with a pungent citrus flavor and some earthiness mixed in.

Buyer beware: the strains of Jack the Ripper that reach into the mid-20% range of THC potency cause an intense head boost that takes effect slowly. It is best to plan accordingly when partaking in a smoke session with Jack the Ripper.

Positive Effects of Jack the Ripper

Recreational tokers enjoy an energetic high from Jack the Ripper, feeling intense euphoria and sometimes even a mild trippy visual experience. The mind is in a fog similar to haze strains, and fits of laughter can break out once Jack the Ripper reaches the height of its effect.

Negative Effects of Jack the Ripper

Tokers should be aware that Jack the Ripper may cause paranoia, dry eyes, cotton mouth or feelings of disorientation. As such, first-time users should take their time and allow the effects of Jack the Ripper to creep in before inhaling excessive amounts of the strain.

The Lineage of Jack the Ripper

Jack the Ripper is the offspring of the Jack's Cleaner and a Space Queen hybrid. Both parents are top-notch cannabis strains with an established history in the world of marijuana.

Jack the Ripper plants can be grown by beginners and typically produce an average yield after a harvest window of 8 to 10 weeks. Growers can expect the plants to grow tall with a long stretch, and they should be prepared to do a moderate level of trimming work as the plants shoot upward toward their full height.

Where to Find Jack the Ripper

Check with your local dispensary to see if they have any Jack the Ripper on their shelves, here!