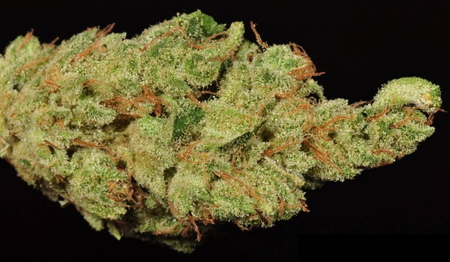 Willie Nelson is backed by famous genetics and the aesthetic of the famous singer. This cannabis strain, is a sativa hybrid bred from Asian landrace strains, and offered in two different genetic combinations. Smokers often utilize to the strain to lighten up social activities, inspire creativity for various tasks, or provide clarity.

Willie Nelson varieties can reach THC contents as high as a mid-twentieth percentile. Judges around the world agree that this stunning sativa strain packs as much star power as its namesake celebrity stoner as Willie Nelson won the Cannabis Cup's Best Sativa award in 2005.

Willie Nelson is a potent sativa dominant strain that stems from the breeding of Vietnamese Black and Highland Nepalese sativas. The THC content of Willie Nelson fluctuates between 17 and 22% but averages around 20% making this strain quite strong.

Willie Nelson does not have much in the way of CBD content, and as such is very infrequently used for medicinal maladies such as pain. Despite the low CBD content, users around the world agree on the euphoric joy associated with smoking this rare strain, and in 2005 it was awarded 'Best Sativa' at the 2005 Cannabis Cup.

Users of Willie Nelson will be blown away by the plant's euphoric and quick setting high. A nice creative buzz sets in before providing bursts of energy and happiness. The highs of Willie Nelson are valuable enough that this plant has won the award for best sativa, and first time users will quickly realize why.

Due to the strength of the psychoactive compounds within Willie Nelson some users may experience a mild headache. Smokers who are prone to paranoia should avoid this strain, as its strength can amplify this unfortunate side effect of marijuana.

Willie Nelson is a cross between Vietnamese Black, a sativa dominant hybrid, and Highland Nepalese, a true sativa. As one would expect with these parents, Willie is a strong sativa dominant hybrid with only mild indica characteristics. This strain was bred in honor of the singer, and upon sampling, quickly became one of his favorites.

Willie Nelson is a strain best grown in an indoor or greenhouse environment. It features a relatively long flowering time between ten and fourteen weeks, and the flower produced is well worth the wait. Dense emerald colored buds litter the plants and the yield is high for a single plant.

The plant does need excellent irrigation, so a hydroponic setup would be extremely beneficial to the grower.

Where to Find Willie Nelson Strain

Willie Nelson can be somewhat difficult to find, as it is a rarer, premium strain of marijuana. Users in marijuana hubs such as Seattle, Portland, Denver, or Los Angeles, may be able to find Willie Nelson, but only after calling a few local dispensaries to check on their availability.

For the determined buyer, however, the search will pay off when they get their hands on this coveted bud.