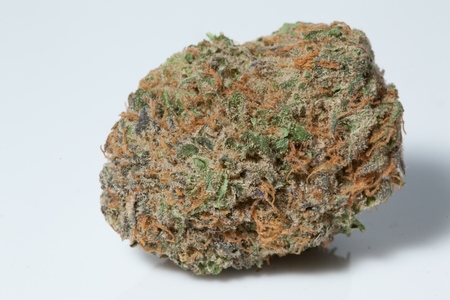 Lavender Jones is a rounded sativa-dominant hybrid with an unusual set of effects and flavor. This strain is not the most potent but sticks out with its pungent and surprising terpene profile. It is said to have a sweet, floral, and lavender undertone which maintains throughout the entire smoke session. Lavender Jones is a smoothing smoking strain which many consumers desire. Its buds are dense and covered in trichomes.

Lavender Jones is a stellar sativa-dominant hybrid. Even though a majority of its effects tend to lean sativa, it does provide a rather balanced high. Its average THC content is around 14 to 18 percent THC and does not usually get much higher. It is a useful strain for beginning smokers looking for a nice subtle high without being stuck in the couch.

Plus, every puff of Lavender Jones tastes phenomenal. It does have a hint of lavender in its floral flavor but is almost grape-like.

It has a dark purple tent to its buds and has an overall excellent jar appeal. Lavender Jones is often skipped over for its THC content, but those who can look past potency are in for a treat with this strain!

Consumers describe the high from Lavender Jones as being initially cerebral with a noticeable body high throughout the bake. The best way to describe the effects of Lavender Jones is as euphoric, energizing, and hungry. It is an ideal strain for consumers on the go who do not want too much of a body high. This strain is particularly lovely for a day of household chores, or even going on a nice hike.

The adverse effects of Lavender Jones are the usual cottonmouth and red eyes. Some consumers report feeling jittery, but it is not a very common adverse effect.

The Lineage of Lavender Jones

Lavender Jones has quite the lineage. It is a cross between Purple Urkle and Casey Jones. Both of its parents are renowned cannabis strains in the community, and they came together to produce a first-class child which many consumers are beginning to love.

Lavender Jones is not a difficult strain to grow and tends to be a suitable strain for beginning growers. It has a quick flowering time of around 55 to 65 days and only gets to a height of about 30 to 40 inches. Between the quick turnaround time and heavy yield, Lavender Jones is an ideal strain for many cultivators.

Where to Find Lavender Jones

This strain is spreading throughout many legal markets but is most common in the state of Arizona. It is also normal for Lavender Jones to show up in Colorado, Oregon, and Nevada.

Check to see if your local dispensary has some Lavender Jones on its shelves, here!