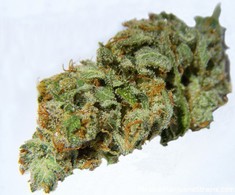 Inspired by the heroic last moments of the 20th-century railroad engineer Casey Jones, this cannabis strain is a recent addition to a long line of Jones-inspired pop culture. From the Grateful Dead to the Grateful Head, Casey Jones has forged a reputation as a fast-acting and potent substance that can take you on the ride of your life. Now it is considered one of the top sativa-dominant strains on the market. Casey Jones is a beautiful strain to smoke in the morning or early afternoon to jump-start your day!

Casey Jones is a surprisingly potent strain for its, somewhat modest, THC content. Casey Jones average THC content is around 15%, but varieties can reach up to 22% THC. This strain delivers a sweet taste, which immediately causes a cerebral high. Casey Jones won second place in the High Life Cup in 2014 (bio) and third place in the 2013 Spannabis Cup.

Casey Jones is beloved among sativa fans for its euphoric high and famous name. The song "Casey Jones" by the Grateful Dead still frequents the airwaves, and the Teenage Mutant Ninja Turtles franchise created a character of the same name. Both the song and the marijuana strain named, Casey Jones, celebrate the legend of an engineer named Casey Jones!

When smoked, Casey Jones can induce euphoria, energy, creativity, and relaxation. This strain is ideal for consumers and patients who are looking for a little boost throughout their day. Many consumers use Casey Jones when they need to get some work done, are going on a hike, or even doing some chores around the house!

Generally, users report dry mouth and dry eyes as the most common adverse effects of the strain. Few find that Casey Jones can induce hunger and restore appetite. Novice smokers can experience paranoia, dizziness, and headaches when they indulge in too much Casey Jones.

The Lineage of Casey Jones

Experienced growers say that Casey Jones is relatively easy to grow. The strain yields a moderate amount of bud and tends to do slightly better when grown indoors instead of outdoors. On average, Casey Jones plants produce 25 to 30 grams per plant.

Where to Find Casey Jones

The strain with a famous name has amassed a following of sativa fans across the world. Casey Jones remains a strain of choice in Amsterdam in Holland and Michigan, California, Oregon, and Washington in the United States.

Check with your local dispensary to see if they have any Casey Jones on their shelves.