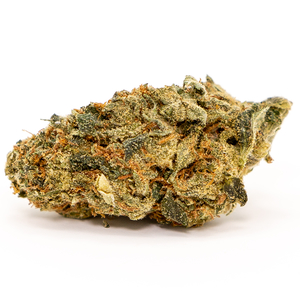 Despite the strain's mysterious origin, Trainwreck has made a name for itself in the cannabis world. This sativa-leaning hybrid is popular due to its hard-hitting cerebral buzz and relaxing effects.

Growers and consumers of this strain know Trainwreck for its pungent citrus musk and thin, resin-coated green leaves. If you want the best quality Trainwreck seeds with germination guaranteed, check out Homegrown Cannabis Co.

Trainwreck is an aptly-named sativa-leaning hybrid known for its hard-hitting high that knocks you off the rails. You can expect a strong mental high rounded out with mellowing physical effects with this strain.

Though the name hints at a potentially unproductive high, Trainwreck produces invigorating cerebral stimulation that keeps you conversational and creative.

Since the 1980s, Trainwreck has become a Northern Californian classic renowned due to its heady effects. When grown correctly, Trainwreck buds reach THC levels from 12% to 21%. Different cannabis experts report that the average is more like 14% to 17%, with CBD levels between 0.02% and 0.1%.

You know you've got a good Trainwreck bud when you inhale a powerfully piney and somewhat citrusy musk. When smoked, Trainwreck can taste earthy and spicy while the harshness of the smoke lingers in your throat. Trainwreck is largely available as clones, but thankfully finding seeds is getting easier for those wanting to grow this beast.

Warning: Seeds can be hit or miss, so donâ??t buy them from unreliable sources. Homegrown Cannabis Co. teaches its customers how to grow and delivers quality cannabis seeds to most states.

Trainwreck hits the mind with speed. Fans of this weed say that it awakens creativity and gives a sense of unbridled happiness.

Trainwreck is well balanced between its mood-enhancing effects and a numbing body buzz. Despite the strain's mysterious genetics, consumers report a powerful hybrid high without overwhelming sativa side effects or indica couch-locking tendencies.

Some users reported that the negative effects could include dry mouth, dizziness, dry eyes, paranoia, and headaches.

Trainwreck's lineage is a contested and slightly confusing tale. Itâ??s rumored that itâ??s a cross between Arcata US and another unknown strain.

While the Arcata Trainwreck is a popular sativa in its own right, most cannabis connoisseurs promote an even more chaotic origin story.

There are rumors that that bud grew out of Northern California in the 1970s from two landrace strains, Thai and Mexican, crossed with an Afghani indica strain.

Legend has it that a train crash near the grow site spooked the growers into plucking their crop early - and thus Trainwreck was born.

Home growers can expect the strain to do well both indoors and outdoors. The dualistic nature of the strain causes plants to grow tall and broad. Outdoor plants will be ready to harvest by early October and can yield up to 24 ounces.

Grown indoors, a singular hydro plant of Trainwreck can produce three (2) to four (4) ounces per square foot. Generally, it takes the strain eight to ten weeks to flower.

Trainwreck nugs tend to be dense with distinctive and thin green leaves coated with a healthy layer of resin. The green buds are slightly on the lighter side, streaked with orange hairs and covered in crystals.

Where To Find Trainwreck

You can find Trainwreck in Michigan, Massachusetts, Maine, Arizona, and California. Why not head over to Homegrown Cannabis Co. for the best Trainwreck seeds with a delivery guarantee.