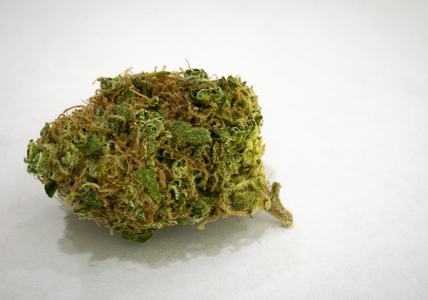 Marijuana connoisseurs can't get enough love from Berry White, an indica-dominant hybrid that brags of its high-THC content and its cannabis celebrity heritage. Berry White has cultivated a reputation as a smooth, seductive, and balanced high suitable for afternoon smoking sessions or any other form of afternoon delight. Berry White is an easy strain to grown both indoors and outdoors.

Berry White is more than just a silver-tongued and soulful singer. There's also a strain named after the Grammy-award winning musician known for his smooth baritone and seductive lyrics. A strain should embody smooth sweetness, and Berry White does not disappoint. The strain, also known as White Berry or Blue Widow, is a model marijuana strain, known for its natural growing process and balanced high. THC content ranges from 16% to 28% according to Steep Hill Halent. The CBD content fluctuates between 0.07% to 0.23%, depending on the variation. While consumers adore Berry White for its potent and balanced effects, the pronounced sweet, berry, and earthy flavor makes Berry White truly stand out!

Berry White is a beautiful indica-dominant strain with a very balanced high. Even though the effects tend to be a relaxing body high, it is known for having an initially uplifting effect. Berry White also tends to be an aphrodisiac and can cause enhanced arousal for some consumers.

Berry White is great for kicking back after a long day and playing some video games.

Negative implications can include dizziness, paranoia, dry eyes and dry mouth. Due to its higher THC content and slightly indica-heavy hand, most smokers prefer to smoke Berry White in the mid or late afternoon.

Like its moniker, the Berry White strain carries some celebrity weight in the marijuana industry. The hybrid strain is a mixture of Blueberry and White Widow. The Blueberry strain is an indica-dominant hybrid famous for its bright blue appearance, fruity scent, and long-lasting effects. White Widow is another favorite strain due to its encompassing white trichrome crystals and high THC level.

While the specific seed cultivators of the strain appear to be a mystery, dispensaries all over the country offer Berry White to their customers. Berry White hasn't accumulated any cannabis awards yet, but it is an up-and-coming star in the cannabis industry.

When grown outdoors, Berry White plants will finish by early October. The strain can grow well indoors and outdoors and can produce 400 to 500 grams per square meter.

Where to Find Berry White

Berry White is a prevalent strain in legalized West Coast states like California, Oregon, and Washington. However, the strain is quickly gaining fame in Colorado and Nevada.

See if your local dispensary has Berry White on their shelves, here!