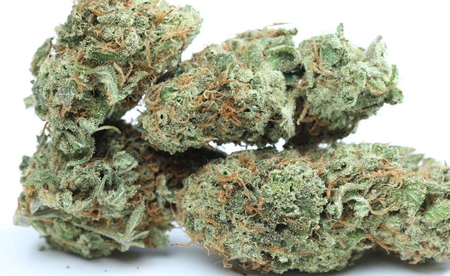 White Widow is famous throughout the professional and popular cannabis culture. With a 50/50 balance of sativa and indica characteristics, this well-rounded hybrid derives its name from its heavy coating of trichomes which cause the buds to appear white at harvest. White Widow is a mysterious mix of landrace strains from South India and Brazil. Varieties of the strain can produce between 18 and 25 percent THC content.

White Widow is a balanced hybrid strain which first flourished in 1990's Netherlands. Since the strain's introduction, White Widow has dominated cannabis markets and culture. Typically bred for the high trichome production, this cannabis strain won High Times Cannabis Cup in 1995 and several awards since.

The strain is famous for powerful stony effects which can persist for hours. White Widow also smokes pleasantly smooth before an uplifting cerebral effect takes over. The uplifting, creativity effects will leave consumers feeling chatty and social while providing body and muscle relaxation. While the sativa heritage comes through in energy, the indica traits balance the raciness of a typical cerebral sativa strain.

Drawing upon its sativa genetics, White Widow fosters an energetic burst before mellowing into a relaxing buzz from its indica parent. The strain cultivates a sense of happiness, relaxation, and euphoria. White Widow provides a pleasant, uplifting euphoria with a mild to moderate body high which can leave the consumer alert and focused. Excellent as a daytime therapy for headaches, migraines, and digestive issues.

As with most cannabis strains, consumers can expect to have a dry mouth and dry eyes after smoking. With the higher THC content and sativa characteristics, some patients may experience slight paranoia, dizziness, or anxiety.

Dutch breeder Green House Seed Company claims credit for the creation of White Widow. The company sells different clones of the strain online, including feminized seeds. White Widow is a mix of Brazilian sativa and a resinous South Indian landrace. Genetically, this cannabis strain possesses 50% sativa and 50% indica breakdown, although effects are thought to be slightly more sativa dominant.

White Widow varieties can successfully grow from a seed or a marijuana clone. This cannabis strain resists mold and bugs, rendering White Widow valuable for both indoor and outdoor growers. White Widow flourishes in the Northern hemisphere by the end of September in mild and temperate climates. When grown indoors, White Widow flowers within eight weeks and produces up to 800 grams per square meter.

Due to the strain's resinous properties, growers favor the strain to help produce cannabis concentrates like bubble hash.

Where to Find White Widow

White Widow is a favorite strain in most legal cannabis markets today, so a person will be able to find it easily in California, Colorado, and Washington.