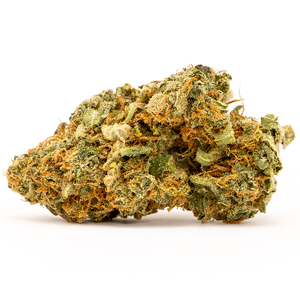 Tangilope is a cross between two beloved sativa strains, known for its overwhelming aroma and unique terpene profile. The scent is exotic, and no other strain can copy it. The effects of this strain are sativa all the way and pave the way for days full of movement and creativity.

Tangilope is a hybrid, but it weighs in at 90 percent sativa. The 10 percent indica helps smooth out some of the racier tendencies of this strain, and also adds a bit more heft to the buds. Tangilope nugs are long and tapered and shaped much like chili peppers. Trichomes abound, with copper pistils threading through the green flower and crystalline coating.

With its unique chocolatey orange scent, Tangilope is easy to recognize on smell alone - even by those who aren't connoisseurs.

The scent profile of Tangilope is nothing short of tantalizing. The citrusy burst of limonene leads sharply, with a sweet and sour orange flavor. Layered in with the orange, you'll discover a disruptive and delightful taste of chocolate. It sounds strange, but many people who try Tangilope liken its character to a mandarin orange or tangerine dipped in chocolate. A slight hint of spice makes itself known on the backend, thanks to some beta-caryophyllene in the terpene profile. Tangilope's terpene profile is most substantial on the myrcene, followed by beta-caryophyllene and alpha-pinene.

Tangilope is not shy with the THC, and you can regularly find retail offerings measuring about 18 to 21 percent in the THC category. This cannabis strain has negligible CBD levels.

Tangilope's sativa dominant genetics show up in full force when it comes to the strain's effects. The high hits almost as soon as you finish the first exhale, and quickly ramps you up into an uplifted, energetic state. If you want to enhance your morning chores or bust a creative block, Tangilope is an excellent strain to try. Many people report a tingling sensation around the head and face, and a perceived sharpening of senses like vision and smell.

Tangilope can enhance focus, making it an excellent strain for productivity and exercise. It can also help facilitate social situations and creates a general sense of inspiration!

With its heavy sativa influence, Tangilope can be far too much for a novice smoker to handle. Consuming too much Tangilope will lead to racing thoughts, paranoia, and a severe case of red-eye. You may find yourself pacing furiously and getting a parched, dry mouth.

Tangilope is the offspring of two powerhouse sativas: Tangie and Chocolope. Both parents, as well as Tangilope, come to us from DNA Genetics, who sought to create the pinnacle of all sativas.

Tangilope is surprisingly easy to grow, making it a suitable choice for novice growers. This strain has an average flowering time of eight to nine weeks and can produce around 14 ounces per plant. Tangilope is quite resistant to the more common forms of mildew and mold and can hold its own against many pests.

Tangilope commands premium prices wherever sold, making it a little difficult to track down. Tangilope's fanbase has been multiplying in Arizona as well as Washington, Oregon, and Montana.