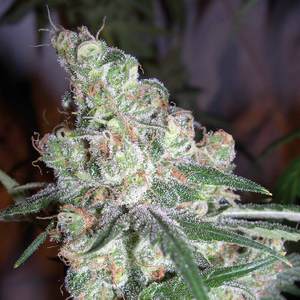 Chocolope is pure sativa, having a unique taste including hints of chocolate along with flavors of coffee and cantaloupe. It sits at the upper midrange of potency for sativas, with tests showing between 17% and 22% THC. Like other sativas, Chocolope gives the user an uplifting, cerebral high which can fuel a creative burst.

Buds of Chocolope are dense, fluffy and cylindrical. Its leaves carry a darker shade of green with orange hairs and can be noticeably sticky. What sets this strain apart is its interesting taste. Tokers can expect a smooth hit with a smoke flavor that adds a slight chocolate taste on the exhale. Chocolope has a sweet aroma that is reminiscent of grapefruit and sugary tea. The mixing of coffee and chocolate flavors make the strain smell and taste almost like a dessert dish, but it is certainly also balanced by its earthy and smoky elements.

Chocolope's effects are euphoric and uplifting, making the smoker more creative without scattering focus as much as a pure haze strain would. Because of its energizing nature, Chocolope is a nice wake-and-bake or early afternoon strain. Some say it can be used to replace the morning cup of coffee. The strain is known for its cerebral effects more so than a body high. Tokers love that Chocolope allows them to remain clear-headed and get work done despite its potency. It is also great for social interactions, both in the experience of the high as well as the novelty of its aroma and taste.

Chocolope has many positive and enjoyable effects that have given this strain something of a following. The high is uplifting and fills smokers with a nice relaxed energy. This is a very common effect for sativa plants, and this flower is no different. The high sets on quickly before dissolving into a mellow and focused experience which makes Chocolope perfect for those looking to smoke yet still get something done.

With all the positives, there are a few negatives that some smokers experience. Dry mouth and dry eyes can accompany the relaxing high. People who are particularly sensitive to marijuana may want to stay clear of this strain as some rare cases have reported anxiousness and paranoia. However, as this strain carries a moderate potency, these negatives are not as pronounced as they would be with a stronger strain.

To produce Chocolope, DNA Genetics cross-bred Chocolate Thai and Cannalope Haze. Both parents are sativas, and it is believed that the landrace strain of Chocolate Thai is the main source of Chocolope's distinctive taste and aroma. Chocolate Thai was popular in the United States as far back in the 1980s, but the strain carries a particularly long 14 weeks for flowering and does not produce high yields.

By cross-breeding Chocolate Thai with Cannalope Haze, DNA Genetics was able to significantly reduce the flowering time down to about 10 to 12 weeks and create the D-Line strain, which is now known as Chocolope.

Chocolope can be grown both indoors and outdoors, but the plants are susceptible to mold and mildew so it is advised that outdoor growers pay attention to the ventilation and prevent such issues. For indoor cultivators, plants can become relatively tall and may be difficult to grow in a more confined space.

It is recommended that the plants be pruned during the vegetative stage to keep the height from becoming an issue during flowering. Because of Chocolope's long harvesting period, outdoor growers can expect to wait until late October or early November for flowering to be complete. However, outdoor Chocolope yields a nice average of about 60 grams per square foot.

Where to find Chocolope

Chocolope is an uncommon strain which means those looking to enjoy the unique flavor and aroma may need to undergo a search. The strain is most common at dispensaries in Washington, but with a little searching, a resident of CO, OR, or CA should be able to source this flower. Those who are willing to search will be rewarded by the stunning flavor and high that this true sativa offers.