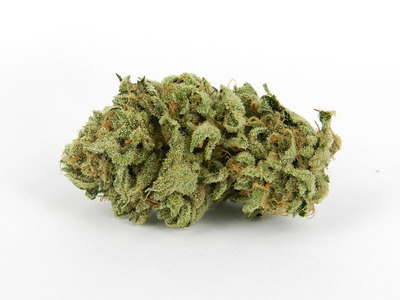 Sour Kush is a phenomenal indica dominant hybrid. It's a cross between Sour Diesel x MK-Ultra. This balanced cross provides the consumer with a clear head high, but a nice body high as well. Sour Kush's citrusy, skunky, and earthy taste satisfies the most seasoned smokers. Sour Kush is a solid flower that every smoker should give a try!

Sour Kush, an indica dominant hybrid, is becoming very popular among consumers. Its powerful lineage gives it a unique and satisfying high.

This 70:30 indica dominant hybrid, hits everybody a little differently. Since every person has their own specific endocannabinoid system, hybrids tend to hit people differently. Sour Kush is a great smoke for almost any smoker. Some people claim to have a really clear and uplifting high, while others say it put them straight to bed.

Either way, Sour Kush is a great smoke for both the morning and at night.

With a cross like Sour Diesel x MK-Ultra, this strain provides its smokers with a heavy high. Typically testing around 20%-22% THC, Sour Kush definitely meets most smokers standards. The Sour Diesel genetics give this strain a very citrusy and skunky flavor.

Not only is Sour Kush a great recreational smoke, but it is also a phenomenal medical flower. Sour Kush has a very heavy and yet balanced high.

Sour Kush is becoming very popular in today's cannabis market. It's well balanced high tailors to a wide range of consumers. This strain is also Sour Kush is also becoming a great strain for concentrates. It's resinous buds, and distinctive tastes make for some great tasting concentrates.

Sour Kush has also been found to be a wonderful way to battle fatigue. That's right. Sour Kush may be a great smoke for after a workout!

Common side effects include red eyes, dry mouth, and paranoia.

With a cross between Sour Diesel x MK-Ultra, this strain makes for a very nice hybrid smoke. There are also a few phenotypes that are specifically Sour Diesel x OG Kush. MK-Ultra is a hybrid cross between OG Kush x G13. This half of the genetics is what gives Sour Kush an earthy and pungent aroma. Sour Kush has a great smell that really shows off the OG Kush aroma.

a solid strain to grow. It takes around 9-10 weeks for flowering, and the plant tends to get very tall. Sour Kush is known for being an extremely resinous strain, especially during flowering. This strain tends to yield around 400 grams per plant when grown indoor, and about 200-300 grams per plant when grown outdoor. Those are some pretty decent yields for such a resinous plant.

Where to Find Sour Kush

Sour Kush is near becoming an industry-wide staple. Whether you are in California, Colorado, Canada, or Maine, the likelihood is good a dispensary near you has it in stock.