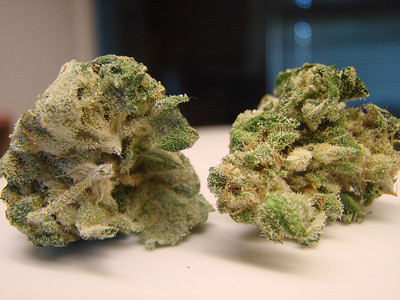 G-13 is an extremely potent strain with many urban legends surrounding its creation. Regardless of the origin, however, G-13 will blow you away with its potency. Also known for its very high resin and THC production

G-13 is a powerful indica strain that has reached legendary status as a result of unconfirmed rumors about its origins. As folklore has it, G-13 was created by the FBI and CIA in tandem with the University of Mississippi in the 1960s. The grow lab at University of Mississippi supposedly created 23 strains, numbered G-1 to G-23, and G-13 was handed to a stoner named Neville Schoenmaker who then spread the strain throughout the United States.

Further advancing the legend, G-13 made an appearance in the Oscar-winning film American Beauty, the lead character was given a puff of the strain by his neighbor.

Historical references aside, G-13 lives up to its legacy on its own. G-13's high potency of up to 26% THC is enough to produce heavy effects for any stoner, and typical batches have a THC percentage ranging from high-teens to low-20s. The G-13 high is characterized by heavy relaxation, though it does not induce couch lock with the same intensity as other indicas. It is a full-on body high that is perfect for medical marijuana cardholders.

G-13 buds are slightly larger than popcorn kernels and carry a light green color with orange hairs. The buds are also covered with plenty of trichomes. The fruity and piney aroma can be intense at times, but G-13 does not typically have a strong taste.

G-13 gives the consumer a relaxed experience without overwhelming fatigue. It is recommended as a wake-and-bake or daytime strain that will relax them without compromising the user's ability to get work done. In fact, some tokers use G-13 to add a burst of motivation and creativity to their day. The tranquil feeling can be helpful for social situations in order to mellow out the symptoms of social anxiety.

G-13 smokers report minimal negative psychological effects, further adding to its reputation as one of the best strains available.

Its exact origins are somewhat unknown, though there is speculation that it comes from a Mexican breed of the Afghani strain.

It is recommended that G-13 be grown indoors using hydroponic methods, but it can also be grown with regular soil or produced outdoors with a harvest in October. One downside of G-13 is that it typically produces lower-than-average yields as compared to other strains. As a result, many growers prefer to cross-breed it with another strain in order to create a hybrid with a better yield. Mr. Nice (G-13 x Hash Plant) is one of the well-known G-13 cross-breeds today.