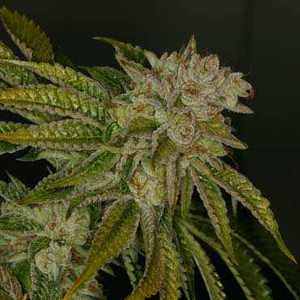 Named after the methods of mental manipulation employed by the CIA's Project MK Ultra, this indica-dominant strain stands apart due to its powerful cerebral effects. MK Ultra produces a sticky, dense, pungent flower. MK Ultra is renowned for its hypnotic' effects and is said to be one of the strongest indica strains in the world. It should be used with caution unless you are planning a day to do nothing for a little while. Due to the strain's sedative qualities, regular recreational recommend smoking MK Ultra at night.

What do you get when you add an Amsterdam seed bank to a US military experiment? MK Ultra is a potent strain often cited as one of the heavier-hitting indica-dominant hybrids in the game. The strain's name comes from the CIA Project MK Ultra, the famous covert experiment that test mind-altering drugs on citizens and government employees. Not-so-coincidentally, the cannabis strain falls mostly into the indica category.

MK Ultra has a harsher, skunky taste and smell. Most that opt to smoke the strain doesn't mind, however. MK Ultra's medicinal value outshines its flavor. The strain can also possess a tang of citrus scent.

MK Ultra even won 1st place Indica at the High Times Cannabis Cup in 2003 and 2nd place in 2004. Its THC content is not too overpowering, but it still averages around 17 percent to 20 percent THC.

Among the cannabis community, MK Ultra is famous for its hypnotic high. MK Ultra starts with an uplifting sense of happiness. Be prepared for a case of the giggles, only to be swept away by a heavy feeling of sedation.

The Lineage of MK Ultra

T.H. Seeds, based in the Netherlands, fathered the MK Ultra strain. The growers crossed G-13 with a Los Angeles O.G. Kush variety. G-13, an indica, is a potent and resinous strain with an intriguing and mysterious origin story. O.G. Kush comprises the backbone of West Coast cannabis and is famous for its sativa-like euphoria. The mood enhancement qualities of O.G. Kush combine with the power of G-13 to create a knock-out high.

MK Ultra plants can grow from 100 cm to 120 cm. On average, it takes plants 56 to 63 days to flower. MK Ultra plants, once bloomed, can yield relatively high.

Where to Find MK Ulta

Check with your local dispensary to see if they have any MK Ultra on their shelves, here!