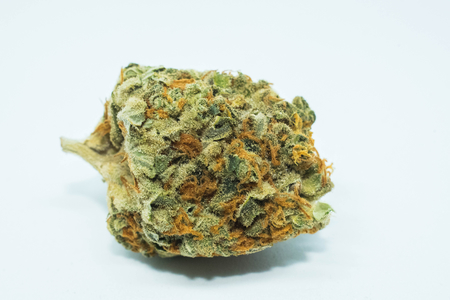 A potent indica dominant hybrid strain, Skywalker OG Kush makes relaxation your only mission. Some users report strong body effects that include mild tingling and numbness, and heaviness in the eyes. Enough of this marijuana and you will be looking to fill your belly and be one with your pillow. One of the most potent hybrids on the market, Skywalker OG Kush does indeed seem to be from a galaxy far, far away. No Jedi mind tricks with this strain, Skywalker OG Kush is the real deal.

While Skywalker genetics solidify Skywalker OG Kush as an out of this world indica hybrid, and, thankfully, the appealing. Sativa influence from the OG Kush lineage is not lost, and both lend to this weeds impressive terpene range. You get the aroma of pungent, earthy depth tasting typically of pine, rounded out with sweet and citrus notes, supported by a pleasantly thick vapor or smoke that remains smooth despite the resounding spiciness.

Skywalker OG Kush may be beloved for its smell and taste, but what smokers adore it for are its effects, which are strong. This cannabis strain is fast becoming a staple product at dispensaries throughout the country, prized for its pronounced relaxation and stress-reduction qualities. In small doses, this marijuana is capable of providing a whole-body sense of relaxation to the consumer, which may involve some mild, pleasant tingling sensations. Skywalker calms the mind even more so, providing an excellent platform for a meditation session. Skywalker OG perfect for unwinding on the couch after a long day of hard work.

Though variations can occur, Skywalker OG Kush tends to appear in the form of dense, medium-sized buds that are olive-green in appearance with hints of orange thanks to a generous amount of loose red-orange hairs. The strain very often produces a milky-white sheen of trichomesthat glisten tastefully under both natural and artificial light. Though the nugs should split apart nicely with a satisfying "crack," the interior can reveal stickiness that tends to cling to whatever it touches.

Skywalker OG Kush is renowned for its mood-enhancing effects, as well as its ability to put your body at ease. Feelings of happiness can elevate into euphoria, which is relieving after a trying day. Those who find it challenging to eat and sleep find this cannabis to be a favorite.

A typical experience with Skywalker OG Kush is cottonmouth, with some people also reporting dry eye. Enough consumption will often lead to the munchies and a nap, which may or may not be a good thing depending on your goals. Overindulgence can lead to paranoia and anxiousness for some individuals. Dizziness can occur in rare cases.

The Lineage of Skywalker OG Kush

Skywalker OG Kush is an 85/15 indica-dominant hybridcross between OG Kush and Skywalker, the latter of which combines Blueberry and Mazar genetics to create a powerful indica. Rich in terpenes such as pinene and myrcene thanks to its OG Kush parent, the strain typically shows THC levels of 15%-25% and is capable of reaching a ceiling of 30% in some cases. CBD content can measure upwards to .3%. Skywalker OG is decidedly Kush-centric, which is immediately evident from its smell, taste and various effects on the consumer/p>

Skywalker OG Kush can be grown inside but does flourish in the great outdoors. This strain of cannabis requires moderate skill to cultivate and is known for above-average yields. Grow time ranges from between 49 to 70 days. Expect medium height plants that need sufficient space due to their bushy nature. When grown outside with proper technique, this indica is ready to harvest come October with yields that outshine their indoor brethren. Skywalker OG Kush does tend to flower on the quick side and is prone to root rot.