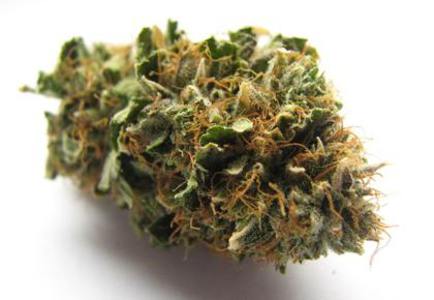 The Raspberry Kush experience is a couch-locked, relaxed, and lazy one. This kush is great for after-work relaxation and putting the user to sleep. The lineage of this amazing weed strain is unknown, but we do know that it is around 75% indica and 25% sativa. Those who love a nice body high while feeling euphoric will love this strain. Raspberry Kush is an indica-dominant hybrid that has gained wide popularity for its fruity taste and uplifting yet relaxing effects.

A few hits of Raspberry Kush will cause a euphoric boost perfect for nighttime conversation with friends, before ultimately causing enough drowsiness to leave the smoker ready for bed.

Raspberry Kush is a moderately strong indica-leaning hybrid that tests at a respectable 16 to 23% THC. Many of this strain's unique characteristics and appeal, however, stems from the plants high CBD content. While many plants are around .01-.05% CBD, Raspberry Kush comes in at a high .15% CBD.

The blend of terpenes present in this flower allows users a brief burst of energy before the couch-lock sensations typical of an indica settle in.

For that reason, this plant has been used heavily by those looking to finish off their nights with a pleasant buzz.

Indica lovers will love this hybrid for its traditional indica effects. Users will feel a burst of energy that melts into a relaxed happiness before making the typical user quite sleepy. If the user is looking for a flower to put him/her to sleep, he/she should look no further than Raspberry Kush.

Accompanying the high, some users have noted that the flower can produce dry mouth, so it is recommended to have a glass of water after smoking. Due to the potent cerebral effects, some users have also stated that they felt a slight headache or dizziness immediately after consuming this flower.

This plant is especially effective for those who struggle with falling to sleep as the second half of the high leaves users with a heavy sedation feeling and the desire to lay down and drift to sleep.

Raspberry Kush is one of the few popular marijuana strains that have uncertain origins. Testing in combination with the effects lead many to believe that this plant is roughly a 75% indica, 25% sativa hybrid.

Speculation exists that this plant can trace its lineage to Hindu Kush from Afghanistan and Pakistan, however others claim the plant is a crossbreed of Cheese (indica) and Raspberry Cough (Sativa). Regardless of the origin, this flower is revered among marijuana enthusiasts for its potent CBD content and brilliant high.

Raspberry Kush seems to grow best outdoors as it is a relatively tall plant. The moderate to short flowering time of nine to ten weeks makes it a popular strain for growers. The individual yield per plant is moderate, and growers can expect an easy harvest with buds that almost fall off the stems once the plant has flowered.

Where to Find Raspberry Kush

Indica lovers looking to experience the unique high of Raspberry Kush will find the most success finding the strain in the Pacific Northwest. This indica-dominant hybrid is particularly popular at dispensaries within states like Washington and Oregon, although users in marijuana hubs like Denver should not have difficulty finding this popular strain.