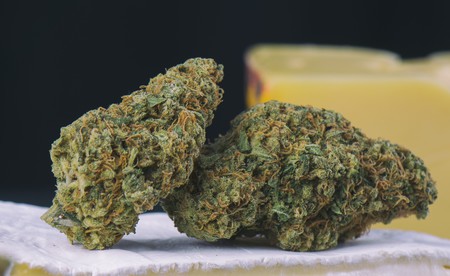 Cheese is a cannabis strain got its name from its potent, sharp scent. When smoked and vaped, Cheese produces a clean smell and relaxing, happy high. The strain is a favorite among consumers and growers, alike, for it's higher THC content and ability to produce quality yields. Originally bred in the UK, Cheese has traveled across the pond since the 1980s and is making a name for itself in the States.

The 80:20 indica dominant Cheese strain famously gets its name from its pungent cheddar aroma and fruity taste. When you choose your Cheese, buds should exhibit bright hues and be slightly leafy. Nugs should have a healthy coat of low-lying trichomes and light orange pistils. Cheese's scent remains its most notable characteristic. Finished buds smell sweet at a distance and should exhibit a funkier scent when broken.

The strong smell and taste of Cheese makes the strain a favorite. Veteran smokers commonly use Cheese with a vaporizer. The flavors and smell are said to come out clean and light. The stain can exude a cheddar-like aroma. Yet, there's no reason to be hesitant about the smell or the quality of the strain itself.

Most Cheese batches produce an average of around 15% THC, while some can climb up to 20% THC content. Some of this strain's potent medical benefits come from its relatively high Potential Positive Effects of Cheese

The strain and is high are suitable for sharing and social situations. When smoked, Cheese can make a user feel euphoric, happy, relaxed, and uplifted. First-hand experiences note that Cheese creeps up on you with a slight mental fogginess but clears up as a relaxing, full-body high that tends to improve your mood.

Cheese is indica dominant. The high Cheese produces comes on quickly and has some uplifting effects. Due to the strain's energizing properties, smokers enjoy Cheese throughout the day and afternoon.

The range of negative effects can include dry eyes and mouth, dizziness, paranoia, and headaches.

Like most cannabis strains, Cheese possesses a slightly muddled and vague origin story. The hybrid is said to have emerged in the UK in 1988 or 1989 from a Skunk #1 phenotype. Out of the Chiltern Hills, the strain became known by its distinctive odor and adopted the moniker "Cheese."

The high-profile group spearheaded the CANABIS (Campaign Against Narcotic Abuse Because of Ignorance in Society) campaign and passed out marijuana seeds along with its message. It is believed the Cheese clones gained popularity among consumers thanks to the handouts. Years later, another Cheese clone seed landed in the lap of Big Buddha growers. The seed company crossed the strain with a pure, landrace indica, creating Big Buddha Cheese.

The new mixture resulted in a strain that consistently produces better yields, flavor, and smoke than the original. Other growers have thrown Mexican and Columbian sativas into the mix. This indica-dominant hybrid made its way across the pond with the help of underground growers like the Exodus Collective and Big Buddha Seeds from the UK.

Cheese can grow well both indoors and outdoors. When grown indoors, Cheese clones prefer moderate amounts of fertilizer. Plants can fall into two phenotypes: shorter and fast to blossom or longer, compact, and slow to grow. It takes the strain approximately 55 to 60 days to flower and will finish outdoors by mid-October. Cheese plants grow well as multi-branch plants or with sea of green operations.

Where to Find Cheese

After undergoing a genetic evolution since the late 1980's, Cheese is quickly making a name for itself in contemporary cannabis markets and among consumers. The clone-only variety is popular throughout California, Washington, Oregon, Michigan, and up north in British Columbia.