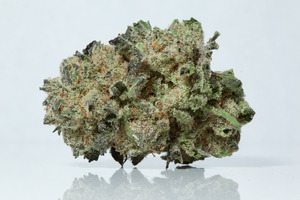 Pre-98 Bubba Kush is by far one of the most classic and popular buds available. This strain began to please smokers across the nation almost 20 years ago. Ever since then, it has been a strong debate as to where this strain originated. There are many theories and stories that people have come up with throughout the years. However, it is nearly impossible to fully pinpoint the true lineage of Pre-98 Bubba Kush.

The true history and lineage of Pre-98 may never be agreed upon, but there is one thing we can agree about. Pre-98 Bubba Kush is a phenomenal smoke. This heavy indica dominant is typically testing around 20% THC. The ratio of indica to sativa is usually around 85% indica and 15% sativa. Pre-98 Bubba Kush is perfect for those rainy days and is a great way to wind down after a busy day.

Pre-98 Bubba Kush has a very distinct and strong flavor. It is similar to an OG Kush but is even more pungent. It's earthy, piney, and coffee like flavors make for a powerful taste. Pre-98 has also been found to have strong aromas that are very spicy and earthy. This stain is an all-around good tasting smoke with a strong high.

With the high potency and indica-dominant genetics of Pre-98 Bubba Kush, consumers typically describe the effects as being euphoric, relaxing, and very sedating.

Pre-98 Bubba Kush has been known to cause certain consumers to feel groggy, paranoid, or even dizzy. Its high potency can be overpowering for some consumers who are not the most experienced. This is not the best strain to smoke during the day as it may put you to sleep.

Not only is it endeared by thousands of cannabis consumers, but it is very popular amongst growers. Pre-98 Bubba Kush has been found to have a solid yield in most environments. It does have a slower vegetation phase but only takes about 8 weeks to flower. This strain is also known for its dense buds and great color.

Where to Find Pre-98 Bubba Kush

Pre-98 Bubba Kush is popular in many different states including Colorado, California, Illinois, and Washington. It is common to find some cuts in Canada as well!

Check with your local dispensary to see if they have any Pre-98 Bubba Kush on their shelves!