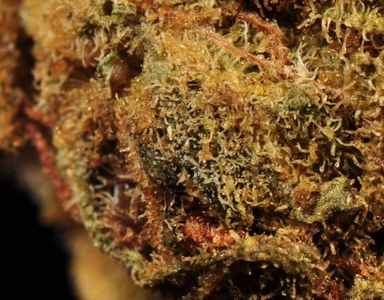 Permafrost is an excellent strain to smoke when it's beginning to look a lot like Christmas. The sativa-hybrid gets its name for its noticeable frosty appearance that is palpable enough to make Frosty the Snowman jealous. Additionally, the strain's pine-fresh scent is reminiscent of snow-covered trees - and the bud's trichome-covered crystals.

Permafrost stands out on its own with its earthy and spicy flavor profile. Regular users commonly note hints of pine. On average, Permafrost varieties possess THC content of around 15 percent. The highest test result known to Permafrost is 19 percent THC. Either way, Permafrost strains eclipse the average THC percentage for sativa strains (13.5 percent). It may not be the highest testing strain, but its effects are excellent for getting a jumpstart in the morning or getting some chores done around the house!

After a few hits of this tasty bud, users have reported strong sentiments of euphoria and uplifting creativity. Many find Permafrost helpful to inspire creative activities - for both work and play. Consequently, regular users can smoke Permafrost in the morning or afternoon without completely losing their focus. Overall, those that smoke Permafrost report an overwhelming sense of relaxation and happiness.

Cannabis-focused websites and industry experts attribute Rogue Buds to the strain's initial creation and cultivation. Permafrost's genetics are also up for debate. Many attribute the strain's lineage to White Widow and Trainwreck. Noting White Widow's crystallized coverage and signature energetic buzz, it makes sense for theorists to connect the two strains.

Trainwreck's powerful cerebral stone and a thin coating of resin is also a logical deduction for the strain's father. Others involved in the cannabis industry consider Kali Mist and Trinity Snow as viable potential parents. Whatever Permafrost's true genetic origins are, the strain likely descended from similarly coated and energizing buds.

Permafrost is an easier strain to grow than most. However, it does have a relatively long flowering time. This strain is suited for both indoor and outdoor environments. Permafrost is a useful strain for beginning growers to try out. Its yield is not the most impressive, but its buds smell phenomenal and glisten in the light. Permafrost is a fun strain to show off in the grow!

Where to Find Permafrost

Permafrost is most abundant in the state of Washington. It is also accessible in the Oregon cannabis market from time to time.

Check with your local dispensary to see if they have any Permafrost on their shelves, here!