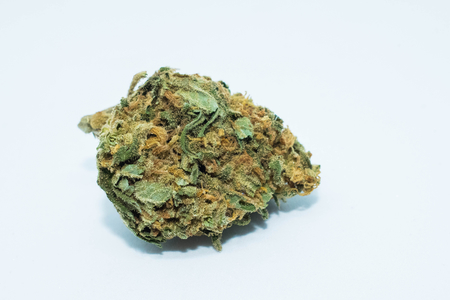 Moby Dick is a superstar in sativa cannabis circles. The strain started in Amsterdam and had since inspired various breeders across the globe. Moby Dick also won Soft Secret's "Girl of the Year" strain in 2010. It has a robust cerebral stimulation which delivers a charged buzz. The aroma of Moby Dick is sweet citrus, which dominates the palate with lemon and eucalyptus tones.

Originating in Amsterdam and currently bred by Dinafem Seeds, Moby Dick has a high THC content which makes for a powerful sativa-dominant hybrid. The strain stands out due to its strong sativa genetics. Moby Dick fosters a buzzing mental high that simultaneously relaxes and stimulates. Furthermore, the strain's pleasant aroma, vitality, and yield make Moby Dick the sativa of choice for many growers. Moby Dick boasts THC percentages well above the 13.5 percent average for sativa strains. On average, Moby Dick bud contains 15 percent THC; however, THC content often reaches up to 21 percent. Due to its resin-covered bud and higher potency, recreational and medical users favor Moby Dick.

When smoking Moby Dick, smokers report feelings of euphoria, happiness, energy, creativity, and relaxation. The high starts off with a burst of energy before mellowing you into a state of relaxation. Moby Dick's energizing effects can help jazz up social situations and other daytime activities. The strain's uplifting qualities foster a sense of friendliness.

The Lineage of Moby Dick

Dinafeam Seeds breed feminized Moby Dick seeds. The strain is a cross between Haze and White Widow. Haze is a Californian-born strain crafted by the famous Haze Brothers. Moby Dick's other parent strain, White Widow, is a popular hybrid known for its balanced effects and winning genetics. Together, these two all-star strains created a cult-like following.

Where to Find Moby Dick

Moby Dick is a prevalent strain throughout Canada. This strain is also forming a following in Colorado.

Check with your local dispensary to see if they have any Moby Dick on their shelves, here!