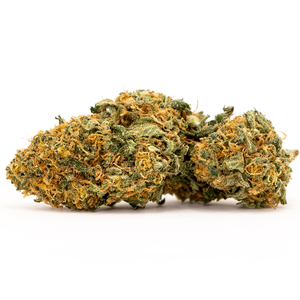 Bred by the infamous Haze Brothers, Haze has become a legendary strain in its own right. The strain cultivates a heady, dreamy experience that can inspire creative bursts and activities. Word of mouth suggests Haze can also heighten arousal. This strain is rarer in the American cannabis market - but that doesn't stop smokers for reaching for a jar of Haze as soon as they see it at their local dispensary.

Haze is like the lovable and legendary sativa with a remarkable history and contemporary reach. Its rumored that the strain arrived under the guidance of the Haze Brothers of California.

Haze possesses its own international genetics that it has proudly passed along to a myriad of hybrid strains. Famous offspring include Strawberry Cough, Silver Haze, and Lemon Haze.

High Times considers the strain the second greatest strain of all time for its status as a "seminal import" that spurned the cannabis trade in Amsterdam.

The general consensus among cannabis connoisseurs is that the Haze Brothers of Northern California first grew Haze in the 1960's. The strain's lengthy growing cycle thrived in the mild California climate.

Since the Haze Brothers disassembled in the 1970s, Haze seeds have been produced by others from the original genetics. These offshoots possess similar genes and often use the same moniker.

When smoked, Haze produces a dreamlike and euphoric high. A potent mental high tends to cloud the mind - hence the strains name - and inspire creativity. Smokers regularly report euphoria, happiness, energy, and sense of being uplifted.

Due to the strain's strong sativa genetics, Haze can lead a user to feel dizzy or paranoid. Cotton mouth, dry eyes, and headaches are other common side effects. Those new to Haze should note that the strain is known to induce hunger. When smoking Haze, it helps to be prepared and pack some water and a snack along with your bowl.

Haze is a cross between four landrace strains. Mexican, Colombian, Thai, and Indian sativa varieties are bred together to make Haze.

Like other sativa strains, Haze seeds produce thin and tall plants. Growers have reported plant heights up to 70 inches. Haze plants do not flower until 10 to 12 weeks. It is commonly reported that it takes plants up to fourteen weeks before Haze bud can be processed.

Haze grows best indoors or outdoors in a desert climate. When grown properly, Haze can produce a yield of 200 grams per square meter. Experienced growers maintain Haze is well worth the wait.

Where to Find Haze

Haze varieties are popular in European markets, notably in Amsterdam, as well as at dispensaries in Colorado, California, and Oregon. Generally, Haze is somewhat harder to find in the US dispensary network.