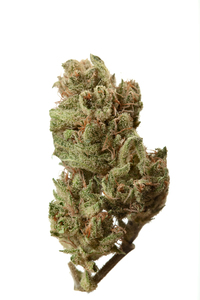 If you love cannabis strains that taste as good as they smell, look no further than Lemon Drop. Just as the name suggests, this light and fluffy bud packs a powerful punch of lemon flavor. Lemon Drop provides a lighter, clear-headed, more cerebral high that is sure to give you a boost of energy. This property makes it an excellent choice for a daytime smoke as it won't leave you overly sleepy.

Lemon Drop is a sativa dominant hybrid, with 60% sativa and 40% indica. Because it is sativa dominant, it is less likely to give users an intense body high. Instead, it offers a light, cerebral high that can help improve your focus and give you increased energy.

Lemon Drop can be up to 23% THC and 0.54% CBD. This makes it a very intense high, although some users claim it does not last quite as long as other top-shelf varieties.

Like many newer strains, the exact origins of Lemon Drop are not known. Many speculate that because it is a high-sativa hybrid at least one of the parents would be a high-sativa strain. The most common guess for Lemon Drop's origins is a cross between Kush NL/Leopard Kush x OG.

Although Lemon Drop boasts a fantastic high, it is most popular on the West Coast of the United States and isn't quite as popular as other lemon-flavored strains. For that reason, it is somewhat of a rare plant to grow.

What is unique about Lemon Drop is that it is one of the few citrus strains that actually tastes, looks, and smells like lemon. The bud is known for it's bursting yellow hairs that almost make it look like a little star. It also smells exactly like the little citrus candies it's named after and tastes distinctly like lemon. This is in stark contrast to other lemon strains, like Lemon G, which smell like lemon but taste skunky and spicy.

Lemon Drop provides the ultimate happy daytime high. This sativa hybrid is perfect for those that feel lazy or unproductive - some even claim they use it to combat fatigue and procrastination. The high from Lemon Drop can improve focus and provide you with an uplifted and happy feeling. Lemon Drop is also a relaxing strain, so you will get a clear, focused energy after using it.

The two biggest negative side-effects associated with Lemon Drop are dry mouth and dry eyes. Thankfully, these side-effects can be combated with water and eye drops. Compared to other substances that can be used for increased energy and to counter depression, those side-effects are very mild. Some users, usually those who don't have a high THC tolerance, can experience headaches from Lemon Drop.

While the exact lineage of Lemon Drop is unknown, one common guess for it's origin is a cross between Kush NL/Leopard Kush, OG, Skunk with Kush, Hashplant, or G-13. All that is really known about the origin of this strain is that it comes out of California and is still considered a West Coast specific strain.

Lemon Drop produces high-THC buds that are extra fluffy and are covered in trichomes. Lemon Drop buds are also known for smelling terrific. Because Lemon Drop has a sativa heritage, it typically grows tall, up to 78 inches, and has elongated buds. Lemon drop can be grown indoors or outdoors. It flowers in 49-56 days.

Where to Find Lemon Drop

Lemon Drop is most commonly found on the West Coast of the United States. There are over 1,000 dispensaries in California that carry the strain, although availability may vary depending on the season. You can also find the strain in states like Washington and Colorado. Outside of the United States, it is also a popular strain in part of Canada like Alberta.