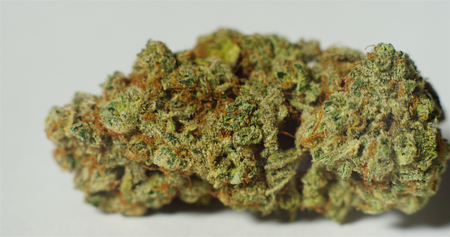 Snow Leopard is an indica dominant hybrid which delivers a satisfying combination of physical and cerebral effects. Its large, beautiful buds are a pleasure to behold, and many consumers enjoy the creeping high they impart. Snow Leopard’s complex aroma directly reflects the well-rounded effects of the strain. On the recreational side, Snow Leopard brings true relaxation closer to consumers’ grasp with its dreamy and uplifting effects. Growers appreciate Snow Leopard for its dense colas and high yields.

Snow Leopard contains at least 45 percent indica with 30 percent sativa, and the other 15 percent is variable in the plant's phenotype expression. The indica dominance manifests in large, somewhat rounded buds. Despite the appealingly fluffy appearance of the nugs, breaking them open reveals a serious supply of resin binding the flower together. The buds are a medium to sage green punctuated with especially long, rusty-orange pistils. Due to the bud size, Snow Leopard trichomes appear particularly bold and well-defined.

Aroma alone is a good enough reason to choose Snow Leopard. Its exotic origins create an equally unique scent profile, dominated by tropical fruits and earthiness. Notes of wood and pine anchor sweetness for a pleasant balance. Fans of Cheese strains will enjoy the remarkable halo of slight fermentation lightly sealing the profile.

Snow Leopard's THC content normally rests in the 17-20 range. Fire Flower (currently the only Oregon cultivator of the strain), has managed to produce Snow Leopard testing at an intimidating 30 percent THC. The CBD content of this strain is quite minimal, reaching about 0.2 percent maximum. Snow Leopard is still quite rare, despite its impressive THC levels.

Snow Leopard is an outstanding stress reliever. Its effects melt slowly into the mind and body over the course of several minutes. Snow Leopard can impart a sense of euphoria if consumed in a large dose, but a moderate amount simply uplifts the spirits. It's accompanied by a happy clarity of mind which fosters creativity. Everything is brighter, more defined, and more meaningful after a bowl of Snow Leopard - making it uniquely suited to productivity in smaller quantities. This strain works especially well in social settings, thanks to its lucid high.

Snow Leopard has remarkably little tendency to cause negative side effects. While any strain touching 30 percent THC can induce some paranoia, Snow Leopard likely will not. Because it's so grounding, even beginners should be able to consume this strain with no worry, as long as they consider moderation.

Snow Leopard has multiple heavy hitters in its genetic pool, all of which contribute their best traits to this intense strain. Bohdi Seeds chose Snow Lotus and Tigermelon to create Snow Leopard. Snow Lotus brings heavy Afghani genetics from Afgooey and Block Head, while Tigermelon brings ChemD and an Uzbekistani landrace hash plant to the table. The combination is undoubtedly a winner, producing one of the most dynamic indicas on the market.

Because it's so rare, knowledge on growing Snow Leopard is difficult to come by. Its Snow Lotus parent is a bit finicky to grow successfully, so Snow Leopard is best left to cultivators with at least some experience. With a flowering time of about nine weeks, you won't have to wait too long for beautiful buds of your own.

Where to Find Snow Leopard

This strain is exotic in name but is extremely rare to find on dispensary shelves. Currently, Snow Leopard is a darling of the Pacific Northwest only. Only Washington and Oregon consumers have legal access to Snow Leopard, but other states probably aren't far behind.