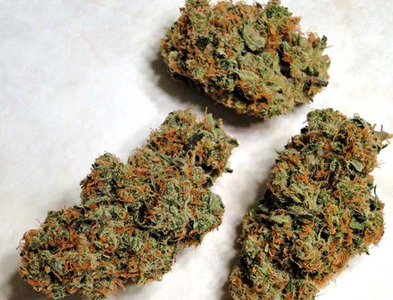 From TGA Subcool Genetics comes Chernobyl, a powerful sativa dominant hybrid that produces an uplifting, energetic high. This strain's parents are notably potent favorites Trainwreck, Jack the Ripper, and Trinity. Its THC levels typically range from high to extreme, which makes it a favorite for experienced smokers looking for a new thrill. Chernobyl is unquestionably one of the more potent strains on the market. Cannabis users enjoy Chernobyl's lemon-lime smell and taste, as well as its long-lasting effects.

Chernobyl combination of two sativas and a sativa dominant hybrid results in a heavy-hitting strain. Phenotypes range from 60 to 80 percent sativa, and its appearance reflects its genetics. Buds of Chernobyl are small to medium-sized, packed with crystal trichomes and orange to light-brown pistils. Nugs typically have an elongated, sometimes conical shape. The aroma of Chernobyl is reminiscent of lemon-lime soft drinks or sherbet.

Some users compare its taste to a lemon-lime Slurpee. Chernobyl's citrus flavor and smell are intense, and it is one of the main reasons why this is a prevalent strain. Limonene dominates the terpene profile, with a bit of myrcene adding to the sweetness of flavor.

Chernobyl's THC levels typically range from the high teens to a massive 30 percent, making it one of the most potent strains available. This strain is not known for its CBD content, although levels can range up to about half a percent. Chernobyl was named one of High Times strains of the Year in 2010, the same year it initially hit the marketplace.

Resulting from uplifting and euphoric effects, Chernobyl is used commonly during the morning or afternoon. It produces a long-lasting high of up to three hours after just a few hits. Some smokers enjoy it throughout the day before switching to an indica or CBD flower at night. The primary effects of Chernobyl are psychological, and many users feel an intense surge of inexplicable joy immediately after consuming this strain. It's ideal for powering through a productive day, and invigorating users for exercise or other physical endeavors. Cannabis consumers looking for strong mood-enhancing effects giving them a long energetic high before ultimately settling into a calm relaxation should give Chernobyl a try.

On occasion, smoking Chernobyl will cause symptoms of paranoia, dizziness, headaches and red eyes. Because of its potentially astounding THC content, novice smokers should start by taking one or two hits and allowing its effects to set in for half an hour or so before going back to the pipe.

The Lineage of Chernobyl

Famed breeder TGA Subcool created Chernobyl by cross-breeding Trainwreck and Trinity and then pollinating it with a male Jack the Ripper seed.

Chernobyl is suited for both outdoor and indoor growth. Its harvest window is between eight and nine weeks, with a flowering period of around 60 days. Pruning the plants and training them, so they don't grow too high will produce better overall yields of Chernobyl. Sometimes the plant's height becomes an issue, and they may need support to maximize bud output. Outdoor growers can expect the flowering cycle to extend into mid-October.

Where to Find Chernobyl

Chernobyl is most popular at dispensaries in the state of Washington. Additionally, Cannabis consumers have found Chernobyl in Oregon, Colorado, Michigan, and Nevada.