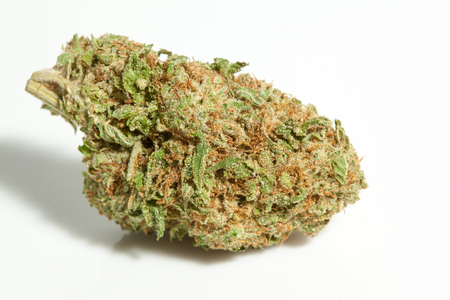 Chemmy Jones is an ideal sativa-dominant hybrid. Its lineage is a combination of two classic cannabis strains which shows in Chemmy Jones's cerebral effects. This strain is not always the highest tester, but its THC content is not what makes it such a desirable strain. The unique terpene profile of Chemmy Jones sticks out amongst consumers. Plus, it has a beautiful jar appeal with buds covered in trichomes. Burping a jar of Chemmy Jones stinks up the whole room. This strain is quite the recreational flower, but medical marijuana cardholders are finding Chemmy Jones to have a tremendous amount of therapeutic value.

Chemmy Jones is the child of two premium cannabis strains with quite the history in the world of marijuana. It is a mild testing sativa-dominant hybrid with a distinct and soothing aroma. Many consumers describe the flavor as being sweet, pine, and floral.

Chemmy Jones is popular for its surprising terpene profile and is known for having dense buds with a frosty coating of trichomes. The average THC content of Chemmy Jones is around 15 to 21 percent THC. Even though its potency is relatively low, its effects are strong and long-lasting. Chemmy Jones is all around quality strain.

The effects of Chemmy Jones are cerebral with a subtle body high. Consumers describe the high as being uplifting, energizing, and euphoric. The initial effects are relaxing and happy, which build into a focused and energetic experience. This strain is ideal for a mid-day smoke or getting the morning started!

The adverse effects of Chemmy Jones are mild. The most common are red eyes and cotton mouth. From time to time, some consumers report feeling jittery and anxious when smoking Chemmy Jones.

The Lineage of Chemmy Jones

Chemmy Jones has a classic set of parents with some fine genetics. It is a cross between Chemdawg D and Casey Jones. Both parents are renowned in the cannabis community for their stellar bud structure and potent effects. Chemmy Jones does an excellent job of representing its prime lineage.

Chemmy Jones is an easier strain to grow compared to other cannabis strains. It does well in both indoor and outdoor environments and has a reasonably fast flowering time. On average it takes about 55 to 65 days to flower. While its yield tends to vary quite a bit, it is a fun strain to have around.

Where to Find Chemmy Jones

Consumers may have difficulty finding Chemmy Jones. It is most common in the state of Washington but also tends to pop up on the Colorado market.

Check to see if a dispensary near you has some Chemmy Jones on their shelves, here!