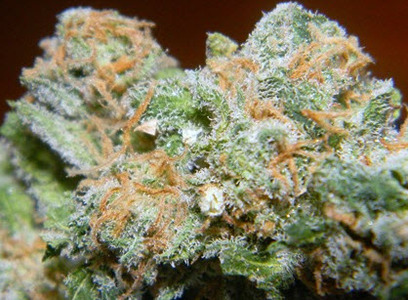 Blue Hash, otherwise known as Blueberry Hash Plant or Hash Berry, is an indica-dominant hybrid with an enjoyable set of effects. It is a potent strain with a high THC content and tends to catch consumers by surprise. It overpowering body high makes it an ideal strain for many therapeutic uses. Blue Hash has quite the lineage to live up to but does a solid job of representing its classic genetics. Its berry, pine, and earthy flavor are unique to itself and help to make this strain a popular choice amongst consumers. Blue Hash is an all-around stellar flower!

Blue Hash is a potent indica-dominant which typically tests around 18 percent to 24 percent THC. It is not surprising that this strain is a favorite amongst experienced consumers. Blue Hash can pack a mighty punch and is famous for its couch-lock effects. Blue Hash produces dense light green buds with a dark purple tint to them.

The jar appeal of this strain is top-shelf and makes it a successful flower on the recreational market. Both medical and recreational consumers are fond of Blue Hash. This strain is perfect for a night in watching movies or playing some video games.

The effects of Blue Hash are strong but slow-acting. The high starts out relaxing and slightly uplifting. As the effects creep along, the sedating and sleepy sensations begin to take over. Blue Hash is known for causing intense munchies which make it ideal for maxing on some popcorn.

The Lineage of Blue Hash

Blue Hash has a celebrity cross with two prime-time cannabis strains. It is a combination of the classic Blueberry and the renowned Hash Plant. These first-class strains came together to produce a smooth smoking hybrid for consumers and patients to enjoy!

Blue Hash is not the easiest strain to grow and produces a relatively low yield. On the plus side, it does have a short flowering time of about 45 to 55 days. Blue Hash does require a lot of space due to its insanely high plants. Some cuts even grow as tall as 110 inches. That said, it is best suited for outdoor grows but in large facilities can be grown indoors.

Where to Find Blue Hash

Blue Hash is a tough strain to find the United States, yet it does show up in Washington and Oregon infrequently. It is most abundant in the Canadian cannabis markets.

Check to see if a local dispensary near you has some Blue Hash on their shelves, here!