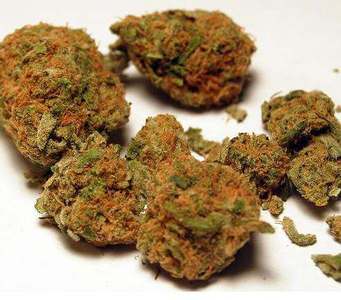 Afghan Kush is a potent indica strain that hails from the infamous Hindu Kush mountain region. Though two different seed banks claim that they first curated the strain, Afghan Kush varieties have a distinct hash flavor and pleasing appearance. Its nugs are incredibly compact, and sticky thanks to high resin production. The dark green is an indicator of Afghan Kush's powerful effects. The potent strain can reach 22% THC and produce up to 600 grams per plant.

Afghan Kush is a 100%, pure indica strain. World of Seeds' strain clocks in around 22% THC. These buds are tight and dense with hashy resin. They tend to be dark green with brilliant orange hairs sticking out, and the trichome coverage is ample.

Breaking apart the buds yields a slightly sweet, yet spicy aroma grounded in earthy notes from the terpene myrcene. A whiff ends with a somewhat woody backdrop and a hint of incense. Even the smell of Afghan Kush can seem intoxicating!

The CBD content of Afghan Kush is astronomical, maxing out around 5% CBD, highlighting further the potent effects of this cannabis strain.

Afghan Kush is known for being almost narcotic in its effects, with no cerebral sativa effects at all. Afghan Kush is a strain you want if your goal is to plant yourself on the couch and immerse yourself in games or movies. Afghan Kush is a great solo strain for those times you feel introspective and want to delve into a creative endeavor that doesn' require too much focus.

The biggest downside to Afghan Kush is high couchlock potential and severely dry eyes. This strain can sap your motivation and inspire monstrous munchies.

Hailing from the Hindu Kush region, Afghan Kush has been grown and perfected for centuries in the mountain range. Afghan Kush, sometimes referred to as Afghan OG, is popular among the cannabis community for its natural, fast-growing requirements. The minds behind the strain at World of Seeds claims that the strain is a stable indica that has been bred and backcrossed enough times to perfect its effects.

However, Sensi Seeds similarly claims credit for the creation and cultivation of Afghan Kush. No matter which seedbank first bred the strain, Afghan Kush is well-liked in international cannabis markets for its robust and relieving high.

World of Seeds claims that the variety comes from the northern Afghanistan portion of the Hindu Kush mountain range. World of Seeds' variety of Afghan Kush comes from the valleys of the Amu Darya River, which borders Tajikistan and Uzbekistan. Due to the full, natural growing processes of the strain, Afghan Kush has been inbred and fine-tuned in the wild.

Afghan Kush seeds should flower within 40 to 55 days. The strain yields quite large quantities of the flower. When grown indoors, Afghan Kush can produce 450 grams per plant; outdoor plants can generate between 500 and 600 grams per plant. Afghan Kush plants are resistant to mold and pests.

Where to Find Afghan Kush

Many dispensaries are reluctant to carry Afghan Kush because its massive narcotic effects can lead new smokers into trouble. Look for this strain in more established legal cannabis markets along the West Coast, in states including California, Washington, and Alaska. Oregon growers are particularly fearless!