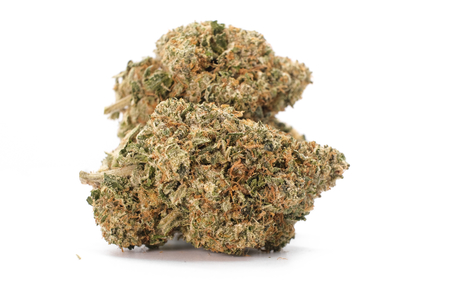 24k Gold (also known as 24k and Kosher Tangie) is a highly sought-after strain that hits all the right spots. Its beautiful golden buds are sticky and sweet, and they produce an energetic sativa high that is tempered by indica in the strain's lineage. Known for its beautiful golden buds and high THC content, 24k Gold is a strain best suited to smokers who know what they're doing. With a sweet, smooth smoke, this strain is ideal for relaxing and boosting your mood. It's fairly easy to grow outdoors, making it a good option for novice growers!

24k is an indica-dominant strain that is a perfect hybrid of its parents. The general ratio of indica to sativa for this strain is 60:40, although some growers push the indica side of the phenotype to mellow out the effects of the sativa. This strain is quite heavy in THC, often testing up to 26%. Its CBD content is negligible, so those sensitive to THC should beware!

24k buds are large and dense, with a typical chunky indica structure. This strain is known for giving off an immediate aroma of citrus, backed by some pine and musk. The terpenes responsible for this profile are limonene, pinene, and myrcene. The smoke from this strain is dense but surprisingly smooth. Expect notes of fruit and a peppery kick on the back end of an inhale.

24k Gold isn't yet a classic strain, but it's easy enough to find in most legalized states now that the breeders have released seeds for sale.

24k is loved for its powerful indica effects. Expect a strong couchlock if smoking a lot, accompanied by powerful sedation.

While paranoia isn't likely, the body high that 24k brings on can be a bit terrifying to the uninitiated. There's little chance of paranoia or mind-racing with 24k Gold. Heavy sedation may also be undesirable and inconvenient, as is the cottonmouth and dry eye that can creep up after a few hits.

Some people occasionally experience a stretching of time or slight distortions of vision, but the cerebral effects mostly manifest as a feeling that your senses have sharpened.

24k was bred by DNA Genetics, the same people who created classics like LA Confidential and the oddly named Chocolope. 24k's parents are Kosher Kush and Tangie, a powerhouse pairing that comes through in spades.

Tangie, a sativa, lends its citrusy aroma and the golden coating that gives the strain its name. Kosher Kush, a heavy indica, is responsible for the dark green coloration and intense sedative effects.

24k is difficult to grow. Its sativa heritage means it can grow extremely tall, and that may hamper indoor growers without the proper space. If growing outdoors, be aware that 24k needs a consistent sun schedule and a climate with moderate humidity.

The flowering time is somewhat extensive, at nine to ten weeks. But if you treat this finicky strain right and have a bit of patience, you'll be rewarded with yields of up to one and a half ounces for every square foot.

Where to Find 24k Gold

24k is a little difficult to find in flower form. For the most part, you'll find it as a concentrate due to its already extreme potency. It's easy to score a dab of 24k in Seattle, for example. Luckily for those who want to grow it in Oregon, clones of 24k Gold are occasionally available at Top Hat Express in Portland.