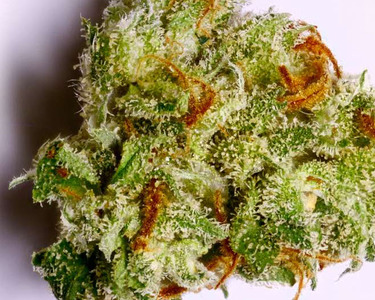 XJ-13, despite its quick rise in the cannabis scene, has been hailed by industry veterans as an exceedingly pleasant sativa strain ideal for waking and baking. The strain is an ideal social smoke and is known to induce creative conversation and activities. XJ-13's indica genetics further fosters the strain's ridiculous trichome coverage. Bred from popular strains Jack Herer and G-13, XJ-13 is a hybrid cross ideal for daytime activities and the social smoker. This strain has a wide range of THC, so consumers of all experience levels should be able to find a batch with an appropriate potency.

Don't let the clinical name scare you. XJ-13 is a well-known and light-hitting hybrid strain. Some varieties are an even 50/50 hybrid, but other branches of this strain favor sativa genetics. XJ-13 displays weighty buds and frosty trichomes thanks to indica input in the gene profile.

Fans of flavorful bud often delight in XJ-13's citrus scent and pleasantly piney taste. Despite the strain's somewhat skunky undertones, XJ-13 is said to smoke smoothly and hit quickly. Terpinolene, myrcene, and humulene populate this strain's terpene profile, and it;s also high in the cannabinoid CBG. Its CBD levels, however, are negligible.

XJ-13 fosters a sense of happiness and relaxation before nailing the user with a strong cerebral stone. Reflective of its higher THC content, XJ-13 is frequently cited as a morning stoner's dream. The strain's potency lingers throughout your day but is influenced by its sativa genetics enough to keep a consumer alert and active.

Due to the strain's strong sativa properties, wallflowers and shy stoners use the strain to help lubricate social situations and stimulate conversation. It makes a great companion to marijuana smoking games!

Consumers prone to paranoia should be careful with XJ-13. Its burst of cerebral energy can shift into unpleasant racing thoughts if consumed in to high a dose. Dry mouth is a concern, and you should consider bringing eyedrops to any XJ-13 sampling session.

XJ-13 is difficult to obtain, as it's a clone-only strain. If you do manage to get your hands on some, you'll find it can thrive both in and outdoors with a flowering time of eight to nine weeks. However, it does need an outdoor climate drier and warmer than average if it's to reach its potential. This strain is recommended for experienced growers, due to its somewhat complex trimming needs.

XJ-13 has grown out of the Northern Californian market and now can be found throughout the West "Cannabis" coast in Washington, California, and Oregon.