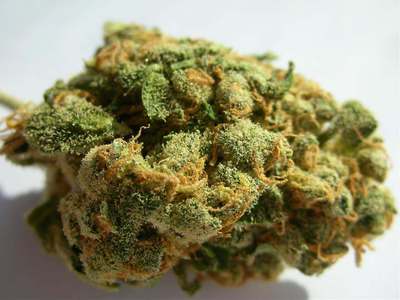 The Jack Herer cannabis strain, named in homage to the late marijuana activist and politician of the same moniker, typically sees THC content between 18 and 23%. Consumers can expect an instant high which shrouds them in happiness, energy and pure euphoria. The strain is best used in the daytime when working, doing a creative project, or socializing due to the motivating and energizing effects. You can find Jack Herer in North America and parts of Europe in four distinct phenotypes.

Named after the late marijuana activist, author, and two-time presidential candidate under the Grassroots Party, the sativa-dominant hybrid Jack Herer is a revolutionary in its own right and carries on the same spirit. This award-winning strain has many different phenotypes, but all notable for quality and potency, anywhere from 18-23 percent THC.

Jack Herer's densely packed buds are a range of green with a spicy, pine scent. Give the buds a squeeze and a tropical frost smell will release. Be prepared for a woody, earthy taste comparable to potpourri. As you inhale you'll feel a fresh and icy sensation down your throat, protecting it from the heat of the joint; this sensation is thought to be a result of the terpene levels in the batch. As you exhale, a sweet grapefruit flavor fills your mouth and lingers there for a few minutes, welcoming you to a high with a swift onset.

At first, it's an energizing headrush, and as more time passes, a tingle of manageable and pleasurable relaxation distributes throughout your limbs. You'll be left feeling stimulated and buzzed but with full awareness of your actions, so riding your high during the day is perfectly reasonable. Jack Herer is the ideal wake and bake strain.

Use this strain when you want to get creative, like at a brainstorming meeting at work or when you take the camera out for a day of photography. It also works well in social situations as you will want to engage with others and start conversations.

Jack Herer is not the strain to use to treat insomnia-- the stimulation of thoughts will keep most users awake, so the daytime is best for use. Have your Gatorade ready because some users report dehydration, along with dry eyes, dry mouth, and some dizziness.

While the exact parents have yet to be confirmed, many believe this strain is a cross of Haze, Northern Lights #5, and Shiva Skunk. Sensi Seeds, the breeder, had the goal of making a strain with the cerebral high of a sativa and the massive resin production of an indica. Sometime in the mid-90s, they released their creation in the Netherlands. Later it was distributed by Dutch pharmacies as a medical grade strain, eventually moved to the US, and has wildly grown in popularity since.

Jack Herer is a great first plant for new growers. The creator has four distinct phenotypes: two indica leaning and two dominantly sativa, and growers can buy the seeds directly from Sensi. For indoor growing, expect a 50-70-day flowering time. If outdoor, sunny or Mediterranean-like climates are best, between 72-80 degrees Fahrenheit. A fast-growing plant with high yields, expect heights to reach eight feet and a mid-October Harvest time. You can find this strain throughout North America and parts of Europe.

Where to Find Jack Herer

Jack Herer is a common, and well sought-after marijuana strain in most cannabis markets. Wildly popular on the West Coast, Jack Herer is relatively easy to locate in California, Colorado, Oregon and Washington, as well as, Canada.