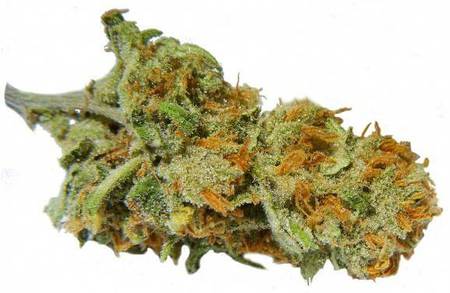 Super Lemon Haze is a sativa-dominant hybrid of Super Silver Haze and Lemon Skunk. It is exactly what you’d expect from a strain with that name: a citrus aroma and mild lemon flavor with an intense cerebral high that leaves you feeling uplifted and energized.

Super Lemon Haze has won the High Times Cannabis Cup in both 2008 and 2009, placed second in the sativa category in 2009, and placed second overall in 2010. If all of those awards didn't grab your attention, just looking at this beautiful bud certainly will.

The gorgeous bright green flower curls around itself, interspersed with orange tendrils and covered in a heavy sprinkling of trichomes. It is most likely the trichomes that packs much of the punch, and contributes to a THC average of 18 to 20 percent.

The CBD levels, on the other hand, are practically nonexistent. Because of its high THC content and the sativa dominance, in addition to being a fun strain to experience.

The high THC content makes it much more likely that users will experience dry mouth and itchy eyes, and maybe more prone to paranoia.

For those interested in growing a crop of Super Lemon Haze for themselves, note that it is a moderately difficult strain to bring to harvest. Growing over two meters in height, this strain takes on a distinct Christmas tree shape, complete with surprisingly long lower branches.

Super Lemon Haze often needs special attention and support during the flowering phase, which occurs between eight and ten weeks. Buds grow in dense, thick clusters and tend to be covered in resinous crystals.

Indoors, Super Lemon Haze can yield up to 600 grams per square meter, and an outdoor crop can yield closer to 800 grams per individual plant. Some growers have even recorded their outdoor plants as producing up to 1,000 grams per plant.

Where to Find Super Lemon Haze

Though originally developed in Amsterdam, Super Lemon Haze has made its way proudly to the West Coast. It is most common in the state of Washington, and can be found in dispensaries throughout several Washington cities. Oregon, California, and Colorado are also quite fond of Super Lemon Haze.