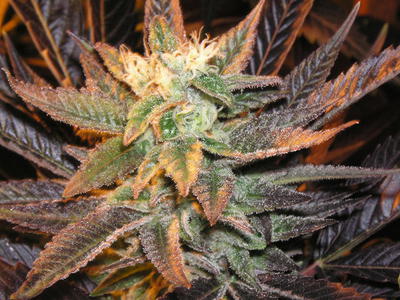 Sage N Sour is a sativa dominant hybrid with a delectable aroma and flavor. This punchy strain has sensational bag appeal and presents big, beautiful flowers with almost transparent trichomes. The effects of Sage N Sour aren’t very long-lasting but offer a pleasant, uplifting feeling that can increase energy and focus. Sage N Sour is a favored strain of growers due to its hardiness and high yields. This strain is ideal for anyone who wants an energetic buzz and doesn't want it to last too long or hit too hard.

Sage N Sour is 75 percent sativa and 25 percent indica, putting it at the further end of the sativa dominant spectrum. Its buds are surprisingly indica-like, having a denser and rounder structure than most sativas. When properly cured, Sage N Sour buds settle into a deep olive-green coloration with blue-purple tints and a barely-there coating of almost invisible trichomes. The nugs are relatively fluffy, and they have impressive mass thanks to copious resin output.

The aroma of Sage N Sour is intense and unique. The primary notes are of sharp diesel and tangy citrus. Together, these scents form a pungent sour aroma that makes up one half of the strain's name. The other, more insistent part of the aroma is like walking into a greenhouse: herbal notes dominated by an unmistakable scent of sage. The best buds are still slightly bendy to the touch and release a delightful burst of fragrance. Terpinolene, a terpene found abundantly in both sage and rosemary, steals the show.

Sage N Sour is not usually a high-THC strain. On average, expect THC content of 15 to 18 percent, with a CBD level ranging up to one percent. In some markets where there's significant competition among growers, you may find Sage N Sour levels maxing out at around 22 percent THC.

Sage N Sour provides a typically sativa experience, rewarding consumers with a head-based high swiftly after consumption. Most consumers first notice a feeling of general well-being washing over them. Not far behind are elevated moods and a strong chance of the giggles. One of the most substantial benefits of Sage N Sour is its ability to energize consumers so that a morning jog or day of house cleaning suddenly seems doable - and maybe even a little fun.

While the effects of Sage N Sour are primarily cerebral, a light physical buzz and numbing can make physical tasks seem less daunting. Sage N Sour is a fantastic social strain, and will have you coming up with endless new topics of conversation.

As with any sativa, racing thoughts and elevated heartbeat can occur alongside dry mouth and eyes. Sage N Sour's high doesn't last very long and wears off after about an hour and a half.

Sage N Sour is a great strain for those who want top yields without top-notch growing experience. This strain is resistant to mold and pests and does well both indoors and outdoors. Growers can expect returns up to 350 grams for every square meter planted.

Where to Find Sage N Sour

Sage N Sour is most popular in Canada, but United States consumers should have the best of luck in Denver, or Portland.