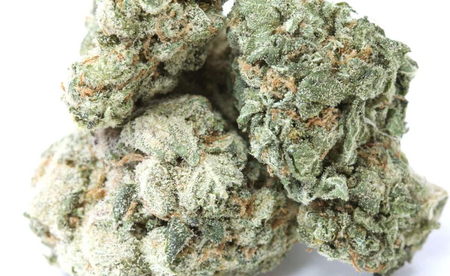 Pineapple Kush is an Indica-dominant hybrid of cannabis most often favored for the calming and centered sensation it brings, ideal after a rough day. Having a pleasant effect on both body and mind, many find this marijuana strain to be a great benefit when looking to get creative.

Having an aroma and flavor that is decidedly pineapple, with a subtle sweetness that lingers pleasantly on the tongue, Pineapple Kush is delicious. Those with sensitive palettes often note a buttery, caramel taste with hints of mint. This cannabis is as pleasing to the eye as it is to the tongue, having buds with a deep green color with hairs that go from bright orange to a deep amber hue.

This strain is known for having a heavy coat of trichomes, making it an ideal plant for those interested in experimenting with making butter or oil at home. THC content tests at 14 percent on the low end and 19.65 percent at the high end. CBD potency ranges between .04 and .2 percent.

These numbers mean that minimally one can expect a laid-back feeling, which can quickly turn into couch lock if consumption is significant enough, though this may not be a bad thing so long as you have no plans, or anything complicated to do. It is suitable for those that prefer a mellow high instead of a heart-racing speedy sensation. As such, this is not your weed for jet-setting, but for relaxing and enjoying a leisurely meal once you've arrived at your destination.

No matter the level of relaxation experienced, this marijuana strain is recommended for leisure time use.

Another cannabinoid found in Pineapple Kush is CBG, which tests with a range between .7 and 1.8 percent. It is likely due to this cannabinoid's higher than typical content that makes Pineapple Kush a favorite in the medical marijuana community.

The terpene content of this Indica hybrid mainly yields B-Myrcene, with Linalool, a-Pinene, D-Limonene, and B-Caryophyllene found in more modest quantities. Unfortunately, Pineapple Kush tends to be as rare as it is unique.

Consumers expect to feel better after ingestion, and Pineapple Kush does not disappoint. The combination of the uplifting Pineapple influence with the relaxing effect of Master Kush in this Indica hybrid has given rise to an unparalleled mood enhancer. Pineapple Kush is quite cerebral and may lead to contemplation and creative thought.

As is typical of many cannabis strains, there is the potential for a case of cottonmouth with Pineapple Kush. Some consumers also get dry eyes after consumption, so if you are prone to that, it is recommended to keep some eye drops handy. Though far more infrequent, dizziness can affect some people, so be safe and avoid doing any involved or potentially hazardous activities until you know how Pineapple Kush affects you. Due to its heavy leaning Indica heritage, anxiety and paranoia can set in for some folks.

The Lineage of Pineapple Kush

Pineapple Kush lays claim to some impressive parentage, and, as such, is a rare find. Much of the genetic history of this cannabis plant comes from landrace strains, making Pineapple Kush a hardy and high yielding strain.

Master Kush hails most of its genetics from the Hindu Kush mountain region and is undoubtedly one of the most famous marijuana strains out there. Pineapple is a result of a hybrid that came from the painstaking process of crossbreeding several landscape varieties over multiple generations.

If you are lucky enough to find Pineapple Kush, expect a flowering time of 53-75 days when grown indoors. For those cultivating outdoors, expect to harvest late September, early October with a yield of about 20 ounces per plant.

Pineapple Kush is typically relatively easy to grow, thanks to having such strong genes because of the landscape genetic heritage it boasts. This plant has a notable ability to resist mold and disease, especially apparent when cultivating indoors.

Where to Find Pineapple Kush

Looking to melt away your day and get cerebral with some Pineapple Kush? If you're lucky enough to be near a dispensary that carries this rare marijuana strain, stock up and invite some friends over. This weed is great for conversation and relaxation!