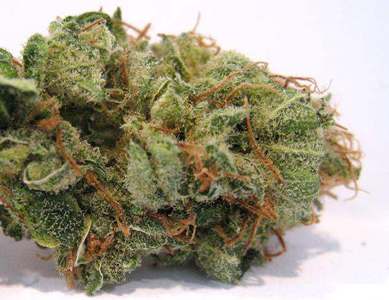 Pineapple Express has crafted a reputation as a potent and powerful smoke since Seth Rogen and James Franco's 2008 silver screen shenanigans. Though not as befuddling and debilitating as the film suggests, the strain still packs a punch. The smell has been likened to fresh apple and mango, with a taste of pineapple, pine and cedar. This hard-hitting sativa provides an energetic high up to 2 hours. Pineapple Express is a cannabis-culture classic known for its fresh scent and energizing effects!

Though not as befuddling and debilitating as the film suggests,the strain still packs a punch. Highs are said to last around two hours -- enough to drive you through your afternoon activities, inside and outside.

The cheery, pleasant buzz is a wonderful lubricant for social situations and an inspiring attitude boost. Pineapple Express balance between a heavy head high and physical stimulation fits adapts to whatever situation a user may find his or herself in.

Pineapple Express usually tests around 17% - 20% THC. While it does not have much CBD, there are still trace amounts in most harvests.

The strain is the best-selling brainchild of G13 Labs, an underground collective from the UK. Pineapple Express is a mix of Trainwreck, a heady sativa-dominant hybrid, and the original Hawaiian pure sativa strain

Commonly reported effects include happiness, euphoria, uplifting emotions, energy, and relaxation. Pineapple Express is known for its ability to hit the sweet spot between calm and stimulated to attain one of the happiest of highs.

Negative effects can include anxiety, dizziness, paranoia, dry eyes and a dry mouth.

Pineapple Express was bred by G13 labs and is the child ofTrainwreck and Hawaii. The smell has been likened to fresh apple and mango, with a taste of pineapple, pine and cedar.

The strain can be grown from seeds (many of which are available to purchase online) and cultivated from clones. Pineapple Express is moderately easy to cultivate and can be successfullygrown indoors and outdoors. Depending on where they are grown, plants can range from tall and spiney to short and dense.

Outdoor plants grow best in warm and mildly humid tropical climates. Plants are typically ready to harvest by mid-October when cultivated outside. When grown indoors, Pineapple Express plants will bloom in approximately seven or eight weeks (average length of 58 flowering days). Yields can be high but are modestly expected to circle 37 grams per foot of plant.

Expect Pineapple Express nugs to be dense, green buds coated with a thick layer of resin. The bud has a potent and fresh scent reminiscent of apple, mango, cedar, pine and, of course, pineapple. Once sparked, the weed leaves a fresh, clean, and tropical flavor in the mouth and earthy aroma in the air.

Where to Find Pineapple Express

The strain is popular in Oregon, Nevada, Michigan, Colorado, Washington,, and British Columbia. However, this funky and strong sativa has amassed a following across legal states all over the US.