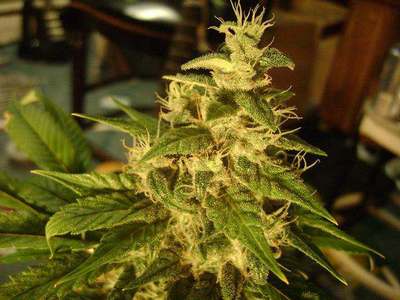 There is a reason why Lemon G is known as the king of Ohio and the Midwest! This potent Sativa dominant hybrid is known for providing an intense high that will not leave you glued to the couch. Lemon G is the daughter of G-13 (the famous strain rumored to have been created by the FBI and CIA in the 60s) and it's other parent is unknown. It is 30% indica, 70% sativa, and contains 15-23% THC, making it a pretty potent flower.

The CBD content in Lemon G is .22%. Lemon G is also known as the "holy-grail" of strains for terpene lovers. Lemon G concentrates can contain up to 81.52% THC and 72.19% total cannabinoids.

Users report the indica effects coming on strong at first, with an intense physical and mental high. However, the body high gives way to a giggly, euphoric, happy, and incredibly creative state that will provide an excellent burst of energy.

The origins of Lemon G are a bit of a mystery. It is known that Lemon G is the daughter of G-13, the notorious strain with a fascinating origin story, and it is suspected that the other parent was either Northern Lights #5, Lemon Skunk, or Love Potion #1.

This is an excellent strain to smoke in the daytime if you want to work on creative projects or if you are avoiding strains that have a sleepy effect.

One of the most enjoyable elements of Lemon G is the smell; the flower has a potent lemon and citrus smell that is very pleasurable. Unfortunately Lemon G does not taste the way it smells, which can be disappointing for some people. Instead of being filled with an overwhelming bout of citrus, Lemon G tastes a little more on the sour and skunky side.

Overall, the effects of Lemon G are very positive. Many people love this strain for it's undeniable euphoric effects. The two most common effects reported after using this strain are euphoria and happiness. The cerebral high also lends itself to creativity and the strain is known for providing a nice burst of energy.

Few strains come with no side-effects, but thankfully, the negative effects of Lemon G are pretty mild. The strain causes dry eyes and dry mouth, and some users report feeling a little dizzy at the onset of the high. This could be the intense indica effects coming on at first. Once the sativa kicks in after a few minutes, the dizziness will likely give way to a euphoric feeling.

Additionally, this strain is so potent it could be a downside for some people. If you are sensitive to THC, take caution with this strain. The effects are fast, intense, and can cause paranoia when taken in too high of a dose.

The origins of Lemon G vary depending on what source you look at. What is known is that Lemon G is the offspring of G-13. For those that are curious, G-13 was rumored to have been created by the CIA, FBI, and other agencies. Legend has it they gathered the world's most potent strains and created a super-strain in secret at the University of Mississippi in the 1960s. While this rumor isn't 100% confirmed, it's still pretty interesting.

G-13 is an earthy strain that is commonly grown in Oregon, Washington, and parts of Canada. It is known for it's pine aroma and earthy taste. It is an indica dominant hybrid, with 70% indica, 30% sativa and is 22-24% THC.

It is thought that the other parent of Lemon G could be Northern Lights #5, Lemon Skunk, or Love Potion #1.

Although Lemon G provides some wonderful effects, it is not a terribly common strain. At one point, people could purchase seeds for Lemon G but it is not most commonly purchased as a clone. It can be grown indoor or outdoors. Indoor it has a flowering time of 9-11 weeks. It is not known for being too difficult to grow, and yields an average of 8-12 ounces per square meter. Outdoors the plant prefers Mediterranean climate and is ready for harvest in October, yielding 12 ounces or more.

Where to Find Lemon G

Lemon G is not a very well known strain compared to something like Gorilla Glue or Blue Dream. However, it can be found in dispensaries in Colorado, Washington, Oregon, and British Colombia.