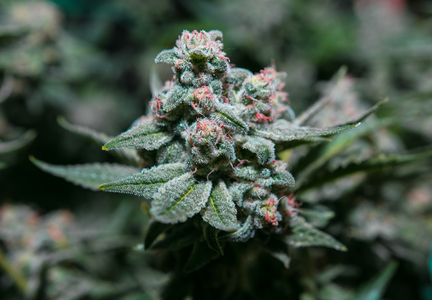 Headband is one of the few cannabis strains that can match the potency, hype, and appeal of its parents. The hybrid has been reported both as an indica-leaning and sativa-leaning strain. The strain's genetic origins vary according to different marijuana sources, but smokers can agree on one thing: Headband is a high-quality strain!

Word to the wise: Headband's high can take a while to settle, so take a breather before loading up a second bowl.

The cross between these potent strains renders Headband a triple threat and ups the strain's THC percentages well into the 20th percentile. Reports place Headband's THC content between 20% THC and an impressive 27% THC, along with CBD levels between 0.07% and 0.2%.

Headband's high potency and unique blend of genetics make it a great smoke for going on a hike, doing some chores, and or even going to the movies. Headband may be a hybrid, but it is commonly sold as a sativa-dominant.

Despite its minute deficits, Headband remains the strain of choice for many hybrid fans. Headband cultivates a somewhat spacey and foggy high that infiltrates the mind and the body. Users regularly report overwhelming feelings of happiness, relaxation, euphoria, and creativity when they smoke Headband.

Many users, novices, and regulars alike claim that the strain can foster a concentrated pressure around one's temples. This is due to the strain's THC and the consequent dilation of blood vessels in the face. This process also contributes to red eyes. Other side effects include cotton mouth and occasional headaches and dizziness.

Headband is the powerful offspring of OG Kush and Sour Diesel. Headband has a complicated claim to fame. A few people attribute the strain's creation to the West Coast-based breeders Reserva Privada. Others say that Headband was bred from 707 Headband, a grassroots strain from Humboldt, a Northern California cannabis haven.

DNA Genetics, the prolific Dutch breeders, counter with their own claim that they studied and modified the landrace strain to produce the modern Headband strain. Most cannabis connoisseurs and dispensaries recall that OG Kush, Sour Diesel, and occasionally Master Kush, as parent strains.

Headband seeds can produce a variety of plant phenotypes and can be successfully grown by beginning cultivars. Headband plants are not particularly vulnerable to mold or diseases and can adapt well to temperature changes. Consequently, Headband can be grown well both indoors and outdoors. Plants do best in areas with excellent air circulation and when the lower branches are cleared. Temperatures should be set between 70 to 80 degrees Fahrenheit. Plants generally take nine to eleven weeks to flower and are known to produce bountiful yields.

Warning: Headband plants have a powerful aroma and those growing in more sensitive environments may want to plan accordingly!

Where to Find Headband

Headband is a popular strain throughout the US and legalized states like Oregon, California, Washington and Colorado.

Check out your local dispensary to see they have any Headband on their shelves!