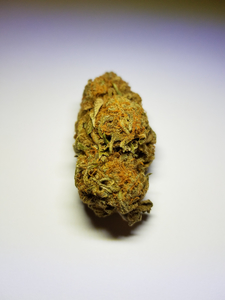 Harlequin is not a strain you want to use recreationally. Heavy on the CBD side and sativa-dominant, Harlequin provides little psychedelic characteristics, which most users don’t even feel. Many people have tried the popular CBD strain Charlotte’s Web, which was created for a young patient suffering from epilepsy. As the case gained popularity, information about CBD came to the forefront of the media.

Harlequin consists of about 75% sativa and it was created from a few landraces. Its traits derive from Colombian Gold (a 1970s favorite), Thai, and Swiss Sativa landraces with a Nepali indica variety. High-CBD and sativa-dominant strains like this have been helping patients long before Charlotte's Web burst onto the scene. Cannabis lab Analytics 360 has measured samples of this strain at between 4-10% THC and 6-15% CBD.

The standard ratio of CBD to THC in Harlequin is 5:2. Harlequin was named after the bright, multi-colored, traditional Italian clowns of the same name. Variously colored hairs and white crystals surround the dense bud. Its musky aroma has a sweet mango, earthy zing. Harlequin has won multiple Cannabis Cup awards for its CBD content in both bud and concentrate form.

Harlequin's effects from person to person. Depending on how much you use, effects could range from dizziness to a feeling of anxiety and paranoia.

Colombian Gold is a vintage strain whose popularity peaked in the 70s before finding a resurgence recently. THC levels in this strain reportedly test above 19%, so it's relatively potent. It's genetically cloned since its seeds are a rarity. If grown outdoors, it must be with daytime temperatures between 70 and 80 degrees with a consistently warm climate with partial humidity.

Those cultivating in homes usually need to pull the leaves from the mature male plants. Colombian Gold can become extremely pungent, so growing inside requires odor-control methods. The Thai strain comes from Southeast Asia. It's a full sativa marijuana strain carrying anywhere from 14-24% THC and 0.1% CBD.

Like Colombian Gold, Harlequin is a clone-only strain. It too needs to be cultivated by pulling the leaves off the male plant. Growing is easy, which allows anyone to try. It has an indica shape, so it can be grown indoors. Outdoors, plants require a steady source of sunlight and temperatures between 70 and 80 degrees Fahrenheit.

Harlequin lacks strong resistance to mold, mildew, and pests. It has an average yield and needs to be harvested between 9 and 11 weeks and may need stakes to keep the dense plant up. THC may increase after the 10 weeks to equal or exceed the CBD levels.

Where to Find Harlequin

Since it's a great source of medication, it's sold in many places. Many brands can be ordered online. You will find stores throughout Seattle, Denver, and Los Angeles.