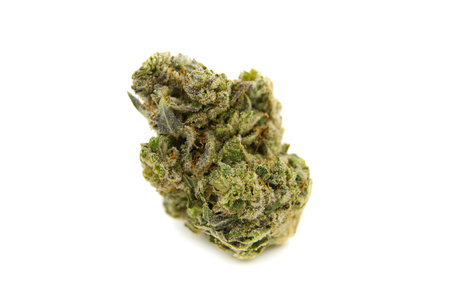 Gorilla Glue #4 (GG #4), a strain created by a happy accident, was produced by farmers Josey Whales and Lonie Watie and originated in California. Since its inception, GG #4 has only grown in popularity: the Sativa-heavy hybrid was the winner of the 2014 Cannabis Cup, was named "best hybrid" in the 2015 World Cannabis Cup.

As legend has it, the strain was created when a Chem Sis plant pollinated a Sour Dub. Though the hermied result was eventually abandoned, a few seeds were saved and ultimately crossed again with chocolate diesel. After trimming the resulting GG #4 plant, Joesy found that his hands were sticking to things "like gorilla glue"- and with that, the new strain was named.

One of the most popular strains of all time, Gorilla Glue #4 is the product of an accidental cross between Chem Sis and Sour Dub, which was later crossed again with Chocolate Diesel. The seriously sticky bud leaves smokers feeling focused, productive, and seriously relaxed -- with maybe a punctuating fit of giggles or two. Overall, GG #4 is an incredibly potent strain, with THC levels anywhere between 25-28%.

This is no bud for novice smokers.

Characterized by an initial cerebral rush, the words "focus" and "productivity" immediately come to mind when describing the first hour of a GG #4 high. A little later, though, its hybrid nature will start to show, with the indica taking root and a slow body high leaving you relaxed without being couch-locked. The result is a combo body-relaxation/mind-stimulation that seems ideal for both the hyper productive and the super unmotivated.

Gorilla Glue is a very potent indica-hybrid. Due to its high THC content, Gorilla Glue #4 can be too strong for some new smokers. While it is a hybrid, if you smoke too much Gorilla Glue #4, the indica effects will take over and you may become very sleepy.

This is not the best strain to smoke during a work day.

As legend has it, the strain was created when a Chem Sis plant pollinated a Sour Dub. A few seeds were saved and, ultimately, were crossed again with chocolate diesel.

While both Joesy and Lonie have cuts of the strain, they only released a limited number of cuts to private buyers, with strict instructions that the resulting clones could not be resold.

Due to the strain's immense popularity, however, those instructions weren't strictly followed and there are some unlicensed growers floating around, as well as a decent number of imitations.

If you're buying GG #4, it's a good idea to ask your budtender about its origins.

The GG #4 plant is mostly grown inside, thanks to its extremely potent, neighbor-alarming smell. With high THC levels, somewhere between 25-28%, the pungency is no surprise-- don't let the dainty light green color of the leaves throw you off. By the time GG #4 is ready to be harvested, the leaves will look like they've been sprinkled with a dusting of snow or frost thanks to a generous trichrome coating.

If you're hoping to get into growing Gorilla Glue #4, you may be mostly out of luck. Due to its crazy popularity, the originators aren't likely to give up the secret sauce any time soon. They are, however, working on releasing GG's #1 and #5, the rumors around which indicate they'll be more available for sale as cuts.

Where to Find Gorilla Glue #4

If you'd rather just buy cured bud from your local dispensary, it may not be that easy a feat either, though it seems like the strain is picking up in prevalence. Look for it at dispensaries in Oregon, California, Washington, Colorado, Nevada, and Michigan-- but be prepared to shell out some cash.