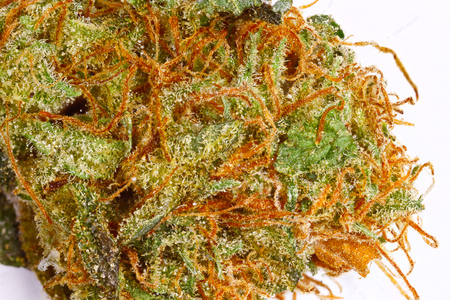 A sticky sweet bud with an equally syrupy flavor, Golden Goat is known for giving smokers a seriously happy high. Characterized by euphoria and creativity, this sativa-heavy hybrid strain was created entirely by accident in Topeka, Kansas, but is now an insanely popular bud around the western United States. Before you notice the high from Golden Goat, you'll see its bag appeal. The densely packed, light green buds take on a slightly pink hue thanks to their light-colored hairs, in combination with a generous coating of resinous crystals.

"Golden goat," characterized by its light green color and yellowish/orange hairs, was the product of pure fate. The strain was created in Topeka, Kansas and has two legendary parents. The resulting seeds were found to grow into fruity scented Golden Goat plants, named after Golden Goat Recycling machines, which give off the sticky-sweet scent of amalgamated soda syrups when they heat up in the dead of summer.

The effects will be pleasant, but not insanely strong -- THC content tends to fall anywhere from 13 percent to 23 percent.

When you get a whiff, you'll find a seriously sweet lemon-cherry scent, reminiscent of both of this strain's parent plants.

The sativa-dominant hybrid is known for producing a kind of giddy euphoria, leaving smokers feeling relaxed, creative, energized, and uplifted. The high will leave you giggling for a couple of hours, followed by a short "cooling down" period where the relaxing effects will still be noticeable.

Caution to the easily spooked, however-- golden goat is sometimes known to cause mild paranoia. However, dry eyes are the most common adverse effect from Golden Goat.

The Lineage of Golden Goat

Golden Goat is a stellar cannabis strain with a premium heritage. It is a cross between Island Sweet Skunk and Hawaiian Romulan. Both shine out in Golden Goats top-notch flavor, high, and jar appeal.

For prospective growers, prepare for a tall, lanky plant that needs a ton of root space. While that may seem like a deal breaker for indoor growers, Golden Goat only grows well in ideal conditions, so it's not always a good choice for outdoor growers (depending on region). The plant does better if you forgo topping, but you'll want to ensure you're regularly pruning of the lower branchy stems. It'll also take on a golden glow as it gets close to harvest time, making this strain live up to its name even further.

Where to Find Golden Goat

If you're looking to pick up some Golden Goat, you're in luck. This strain is readily available around Colorado, Washington, Nevada, Arizona, and Illinois.

Check with your local dispensary to see if they have any Golden Goat on their shelves, here!