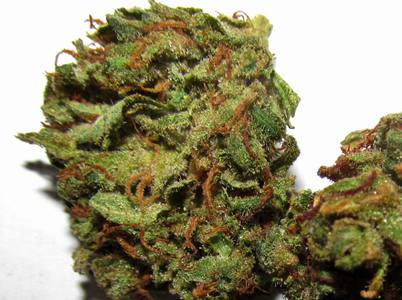 Critical Haze is the result of joining the strains of Afghan Haze male and Critical Mass female. Because of its genetic lineage, this strain packs a punch. Shantibaba and Nevil, two of the three minds behind the Mr. Nice Seed Company, mixed two prime strains and claims to create a plant that has satisfied many growers across the country. Critical Haze possesses an earthy yet slightly sweet tang that teases a slow landing high. The hybrid induces a sense of full-body relaxation and simultaneous mental stimulation.

Critical Haze is an acclaimed hybrid strain fortified by legendary cannabis genetics. Mr. Nice Seeds estimates that the strain's breed can be broken down as 25% Skunk, 25% Haze, and 50% Afghan. THC reports range from 18% to 22%.

Critical Haze's CBD content is low only reaching .07%. Critical Haze is slightly indica dominant and combines the fresh citrus scent of Haze varieties and the soothing, earthy undertones of its indica predecessors. Looking at this bud, you will see a medium green flower with dull orange hairs and frosty crystals covering the flower.

When smoked, Critical Haze eases the user into full-body relaxation with the muscles and the mind, typical of hybrid strains. Critical Haze builds a buzzing sense of relaxation, creativity, and happiness. Few smokers assert that Critical Haze can stimulate an intoxicating sense of euphoria and potentially arousal. The strain's uplifting nature extends to its physical effects as well. This strain can initiate pleasant, tingling sensations in the body.

Some adverse effects are dry mouth and eyes, paranoia, headache, and dizziness.

Critical Mass is a common strain derived from Afghani and Skunk #1. Its THC content can reach as high as 20% with a CBD level of 5%. As an 80% indica strain, Critical Mass is dense, but flaky closer to the surface. It's a pale green color with dull orange hairs and is covered in crystals.

Critical Mass can be grown both indoors and outdoors extending to a medium height. Growing plants indoors takes about 8 to 9 weeks with a yield of 27oz per square meter. With outdoor growing, plants need to be harvested by mid- September yielding 21 ounces per plant. To flourish, plants need to be in warm sunny Mediterranean climate. Critical Mass is easy to grow.

Afghan Haze is a hybrid, sativa leaning bud popular for its connection with the Afghan landrace. Low in CBD content reaching only .2%, its THC content makes up for it reaching 21%. The flower is a little more on the flaky side contrary to the original Afghan strain. It's pale green with orange hairs and of white crystal dust.

Afghan Haze can be grown both indoors and outdoors in warm climate. Growing indoors takes 10 weeks yielding 12-16oz per square meter. Plant growing outdoors need to be harvested mid to late October. Some experience is needed to grow Afghan Haze.

Critical Haze seeds can thrive in both indoor and outdoor grow operations. Mr. Nice Seeds estimates that indoor growing yields 16 to 22oz within 8 to 10 weeks. Certain varieties can take up to twelve weeks to be ready to harvest. When grown outdoors, Critical Haze plants can be expected to flower by mid-October.

Mr. Nice Seeds attests that Critical Haze thrives in Spanish, Australian, American, Italian, and Canadian climates. When grown south of the equator, Critical Haze will flourish by late March. Due to the strain's lengthier growing time, some experience is necessary. Cultivators can tease the full flavor and potential of Critical Haze.

Where to Find Critical Haze

Critical Haze is an exclusive, limited-edition strain that blends the potent genetics of Mr. Nice Seed's original seed collection. It is found commonly in California, Oregon, Nevada, and Colorado.