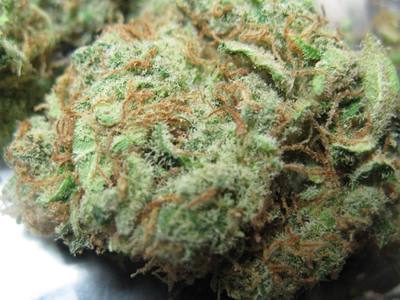 Critical Mass is a popular strain among growers due to the shorter flowering time and relatively high yields of Critical Mass. The skunky, dense buds are low on resin yet manage to still produce an energizing and relaxing experience. consumers recommend smoking Critical Mass to uplift your afternoon activities.

Critical Mass is a fruity hybrid making waves for its ability to provide quality relief from life's daily pains and problems. The strain gets its name from the plant's large production that can lead branches to snap under the weight of the dense buds. The Dutch-born strain can pack THC levels well over 20%. Medical patients and recreational customers can bet on Critical Mass to relax their body and uplift their mood.

When smoked, Critical Mass emits an earthy, slightly sour and sweet taste. The strain is known for its Skunky smell packed into the dense buds. Critical Mass nugs tend to be a darker green with streaks of orange and brown hairs throughout the bud. Nugs can have a lighter crystal coating but often possess a moderate amount of resin. The lighter resin shouldn't faze you, though. Fans and long-time consumers of the strain promise that Critical Mass packs a punch - without decimating your wallet.

Commercial growers and companies also favor the strain for its dense, plentiful yields that pack an equally powerful high. Critical Mass is said to be the heaviest plant used for commercial production of outdoor crops.

Both newcomers and veteran smokers favor Critical Mass for is ability to deliver a powerful experience with ease. Critical Mass boasts a THC content reported between 18% and 22%. Consumers tend to feel relaxed, happy, uplifted and somewhat tired after smoking the strain.

Negative effects can include dry mouth and dry eyes, anxiety, dizziness, and paranoia

The Lineage of Critical Mass

Critical Mass is a hybrid between Afghani and Skunk #1. The Afghani indica is a heavy-handed strain that is one of the earliest marijuana varieties and has fathered a long list of strains. The Skunk #1 strain fosters the earthy subtlety and sour skunkiness of Critical Mass. Both of these parent strains contribute to Critical Mass' energizing effects.

The company and the strain is ultimately a result of the ongoing competition between cannabis connoisseurs Scott Blakey and Arjan Roskam. Blakey, along with a team of marijuana veterans, went on to create Critical Mass. The strain is quickly gaining a reputation as the Blue Dream of the Spanish cannabis world and is a superstar hybrid throughout most of Europe.

The strain's heavy flower construction can be suspect to mold if grown in environment that is too humid. When grown outdoors, the plant will be ready for harvest by September in the northern hemisphere or March in the southern hemisphere. When grown indoors, Critical Mass takes an average of 50 days to flower but can be ready to harvest in 45 days.

Expect yields up to three (3) ounces per square foot for indoor plants and seven (7) to ten (10) ounces per plant when produced outdoors. Despite the plant's tendency to grow mold in too humid environments, veteran and novice growers can be successful with Critical Mass.

Now, the strain cultivates popularity in the States due to its high yields and relatively easy cultivation process. Critical Mass is a profitable and prolific plant for commercial farmers and outdoor growers alike.

Where To Find Critical Mass