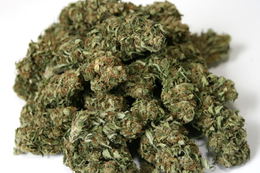 Burmese Kush is a stellar OG Kush child with quite the quality traits. This strain is a powerful one and is known for its high THC content. Burmese Kush represents its Kush lineage through its distinct flavor profile and stellar bud structure. This strain has a unique taste and aroma which consumers describe as sweet, woody, and herbal. Burmese Kush produces dense dark green buds with natural jar appeal. Consumers enjoy puffing down on this and are very fond of its fast-acting effects. This strain is perfect for staying in and watching movies or munching on a large meal.

Burmese Kush is an indica-dominant hybrid with a soothing set of effects. It's a premium OG Kush child with a distinct terpene flavor, excellent jar appeal, and a pungent aroma. Burmese Kush is a high-quality flower with a decent consumer following. While it's a top-notch recreational strain, Burmese Kush has a tremendous amount of therapeutic potential. The average THC content is typically around 16 percent to 18 percent THC. The effects of this strain set in quickly and don't linger too long. Nevertheless, it is renowned for causing the body to relax.

Consumers describe the effects of Burmese Kush as euphoric, happy, and relaxing. Eventually, the effects do become sedating, but the initial high is slightly energizing and creative. This strain is ideal for chilling after a long day.

Burmese Kush does not have many adverse effects. Some consumers report feeling groggy or paranoid when consuming high amounts of this strain. The more common adverse effect is red eyes.

The Lineage of Burmese Kush

The lineage of Burmese Kush is a classic heritage. This strain is a cross between OG Kush and Burma indica strain. The OG Kush stands out in this cross and makes Burmese Kush a quality Kush child.

Burmese Kush is not an easy strain to grow. It requires much more attention than other strains and tends to be sensitive throughout the growing process. Burmese Kush does not produce high yields, but the quality of its buds is well worth it. Its flowering time is about 60 to 70 days long but may go a bit quicker in certain environments. Burmese Kush is an ideal strain for novice growers to challenge their skills.

Where to Find Burmese Kush

Burmese Kush is not always available. It's most common in state markets like Oregon and Washington. Burmese Kush is also abundant in the Canadian cannabis market.

Check to see if a local dispensary near you has some Burmese Kush on their shelves!