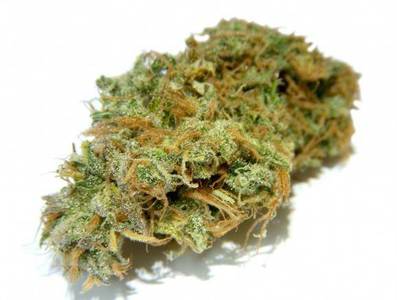 White Russian is an award-winning hybrid from Serious Seeds that boast serious genetics and an intense high. Though the strain genetically leans towards an indica, White Russian packs a pleasantly surprising cerebral stone beloved by patients and consumers. The indica-leaning strain is known for its dense and resinous buds (often plucked from the top of the plant), strong skunk smell, and long-lasting high.

This award-winning strain quickly produces lush and fertile plants as enticing in appearance as it is in potency. White Russian has won numerous awards since its entry into the cannabis scene in the 1990s, including the 2013 High Life Cup in Amsterdam and the best overall prize in the 1996 High Times Cannabis Cup. Though an indica-dominant strain, White Russian pleasantly surprises the smoker with an uplifting cerebral stone. White Russian typically tests around 20% THC content; newer versions of the strain have reached 25% THC.

Negative symptoms are few, but red eyes and dry mouth are the most common adverse effects. Like most other strains, White Widow can cause dizziness, paranoia, and headaches when over consumed.

The Lineage of White Russian

White Russian is a combination of Serious Seeds' AK-47 strain, and a celebrated clone of White Widow bred in the 1990s. White Widow embraced the indica-dominant properties of its predecessors and was considered one of the most potent strains in the global industry.

White Russian plants grow to a medium height and grow seductively dense and resin-coated flower. As the plants' flower, they cultivate a skunky and robust aroma. Serious Seeds notes that the strain can grow well both indoors and outdoors. Seedlings vegetate for four to five weeks outdoors and are ready to harvest in mid-to-late October. When grown indoors, the strain will flower between 56 to 63 days and yield up to 500 grams per square meter.

Where to Find White Russian

Check with your local dispensary to see if they have any White Russian on their shelves, here!